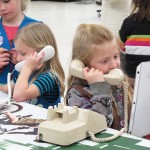 These young Girl Scouts brush-up on their phone-banking skills. 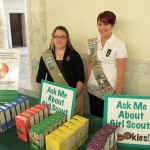 Makayla Williams and Brenda Bennett handed out cookies and talked with lawmakers at the Capitol on President’s Day. 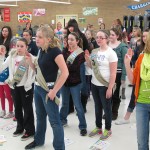 A Girl Scout rally wouldn’t be complete without the Girl Scout pledge. “On my honor, I will try: To serve God and my country, To help people at all times, And to live by the Girl Scout Law.” 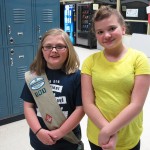 Katryna Kelly, 13, and Hailey Murray, 12, are in the same troop. Both girls sold hundreds of boxes of cookies last year. 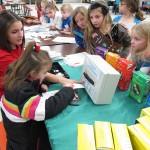 These Scouts learn how to count change for their future customers. 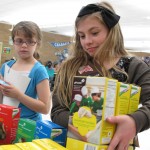 Cosette is 8-years-old and recently became a Girl Scout. Here’s why she joined, “You get to learn new friends, and you get to sell some cookies, and maybe eat some.” 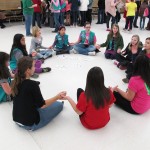 A song-circle formed before the rally kicked off. 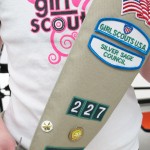 These are Naomi Winkler’s badges. She’s in 6th grade and has been a Girl Scout for four years.

Famous for its potatoes, trout fishing, and blue AstroTurf, Idaho might not have much in common with Hawaii. But here’s one thing: Idaho and Hawaii are the only two states in the country to tax Girl Scout Cookies. Now, some local Scouts are beefing up their sales pitches and learning to lobby.

Girl Scouts across the country are getting amped up to sell as many boxes of their famed Samoas, Thin Mints, and Tag-a-longs as they possibly can. They have about a month to close the deal with neighbors, friends and grandmothers.

Your Guide to Idaho’s Sales Tax

At a recent cookie event near Boise — think Girl Scout-style pep rally — more than 100 kids, some as young as kindergarteners, donned their badged-sashes and met at a middle-school cafeteria. They learned how to count change, fill out order forms, set goals for the cookie season, and did some singing too.

The Girl Scouts of Silver Sage, the council in southern Idaho, know all about selling cookies door-to-door, and now, they’re learning about state tax policy. The sales tax to be exact.

I asked some of the Scouts to tell me everything they knew about Idaho’s sales tax.
For 8-year-old Cosette, it’s not much. “It’s like taxes? That’s all I know about it.”

But 12-year-old Hailey Murray has clearly been paying attention. She rattled off the specifics of Idaho’s sales tax with ease.

“If you buy something from the store and it’s a dollar, you have to pay an additional 6 cents,” Murray says. “I kind of think it’s a downer because instead of paying a dollar you have to pull out another 6 cents.”

Murray isn’t the only one who thinks it’s a downer. The Scouts in Idaho are lobbying state lawmakers to get rid of the state’s 6 percent sales tax on Girl Scout cookies.  The tax here amounts to 22 cents per box.

To change the policy, the Girl Scouts will have to go through Rep. Gary Collins (R-Nampa). His committee, House Revenue and Taxation, is the gatekeeper for all new tax exemptions.

Judging by the four boxes of Girl Scout cookies on his desk, he’s well aware of the issue.

“I’ve been here for 12 years, and I’ve been looking for that graft they talk about politicians getting,” Collins says with a smile, “I guess that’s what you’d call that. Four boxes of cookies. And I haven’t ate any of them either.”

Collins plans to let his committee at least see the proposal to exempt Idaho Girl Scout cookies from the sales tax, but he doesn’t know if it will go further than that. The Scouts in Idaho sell about $2.5 million worth of cookies each year, and $140,000 of that goes to the state.

On their President’s Day off from school, some Girl Scouts set up shop in the state Capitol rotunda to hand out free boxes of cookies to lawmakers and answer questions.  Little did they know they’d become tax policy experts and lobbyists this year.

While the girls did their part to sway legislators, Julie Hart, a professional lobbyist working for free on behalf of Idaho’s Girl Scouts, looked on.

Some of the Girl Scouts have a few ideas about how they could spend that $140,000 that gets paid in taxes each year. Things like service projects, troop camping trips, and donating to the local food bank. Hailey Murray has some fun ideas too.

“Well, I think you could probably, like, buy millions of cookies,” says Murray. “And then maybe buy a Girl Scout house, or Girl Scout items like clothing or something…you could really buy anything.”

Idaho’s Girl Scouts will have to wait and see if their lobbying efforts pay off.

They’re not the only fundraiser that’s taxed here. Popcorn sold by the Boy Scouts is taxed, too, along with all other sales of magazines or food.

But then again, nothing tastes quite like a Thin Mint or a Samoa.