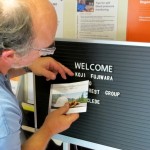 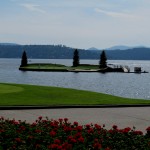 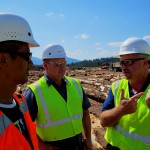 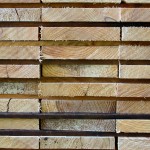 Before the recession hit, the sawmill in the North Idaho town of Laclede was known for its reliability.  It had never seen a shutdown, not in Steve Spletstoser’s nearly 30 years of working there.  Then came 2008.

“It was really eye-opening to see,” Spletstoser says.  “Your livelihood is hanging in the balance.”  Day after day, the mill cut lumber, and day after day it piled up.  Very little left the lot.

“There was 21 million feet of packaged lumber sitting here,” Spletstoser recalls.  “There was no place to park.  You almost couldn’t see to drive in here because it was solid wood and it was all ready to ship, and there was no one buying it.”

As one Idaho company discovered, there’s a special symmetry between Japanese home-building preferences and timber from the Intermountain West.

That story, which is also the story of how the Laclede mill got running again, starts in an unlikely place: on a swank North Idaho golf course famous for its floating green.  Five men are just starting their golf game.  “It’s us three versus the two,” says Ahren Spilker, laughing.  “So it’s the Americans versus the Japanese!”

Spilker oversees export sales for Idaho Forest Group, the state’s largest lumber producer, and the owner of the Laclede mill.  The golf game is a treat for a Japanese client named Koji Fujiwara, who flew in from Tokyo.  It’s a break from the hot and noisy business of touring sawmills in summertime.

The visit also has included plenty of that.  “What we’re looking for is cleanliness of the facility, accuracy of the saws, what type of products they can make that we can use for export,” Paul Owen explains during one of those tours.

Owen is the president of a lumber exporting and consulting company called Vanport International, and he connected Idaho Forest Group and Koji Fujiwara. He stands amid tall stacks of lumber that stretch high overhead.  Owen says wood from this intermountain region is just right for the demanding Japanese market.  Reason number one?  “The knots,” Owen says.  “They’re what we call live knots, so they don’t drop out or create holes.”

Then, there’s strength.  “A lot of times when you relieve a piece of wood — the compression?  It’ll bend and twist.  But Idaho wood tends to be very stable.”

Idaho doesn’t get much rainfall.  That means its stands of timber grow slowly, producing wood with a fine grain and dense growth rings.  Lumber made from the most perfect of these trees brings high prices in Japan.

“That’s why the Japanese market sets up well for us, because they are willing to pay for quality,” says Idaho Forest Group’s Spilker.  He has worked in the timber industry for 20 years, but he only got started in export sales in 2009, after the domestic lumber market tanked.  Before then, the company’s exports were limited to the occasional truckload sent to Mexico.  They needed to diversify, and Japan was a good match.

“You walk into a grocery store in Japan, and their apples are individually wrapped and cellophaned and protected,” Spilker says.  “And every fruit and vegetable is of pristine color, shape, size, texture.  They’re willing to pay for quality, and their house is no different.”

Spilker says that focus on quality creates a housing market with a different logic than the one in the U.S.  There’s more custom building.  Families often keep a close watch on the construction process.  They inspect the quality of the lumber, even if it’s going to be covered over, never to be seen again.

Jim Fink, who has lived in Japan for 20 years and is the country manager for real estate company Colliers International, says this focus on quality is ubiquitous.  “A joke I often make is – you’ve heard of the 80-20 rule in business, right?” he asks.

That’s one reason for a key difference between the U.S. and Japanese housing markets.  In Japan, homes are like cars.  Instead of gaining value over time, they depreciate.  They lose value the minute someone moves in.

All of that has been good for mill worker Steve Spletstoser.  Like clockwork, the Laclede mill turns out lumber for Japanese buyers.  “There’s a consistent volume that we need to cut, each month,” he says.  “We cut it, we package it, we put it on a truck, and it’s gone, every month.”

Spletstoser sounds proud, and satisfied.  These days, more than 100 workers punch in at the mill in Laclede.  Idaho Forest Group’s exports bring in between $15 and $20 million a year.  And it’s all due in large part to Japanese homeowners, demanding the best.