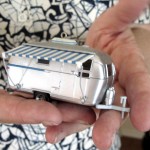 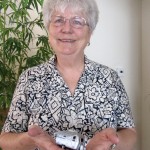 Judy Canada says the Airstream life makes her feel like a kid again. 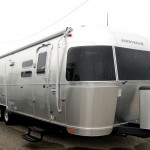 The iconic silver Airstream has been on the road since the 1930s. 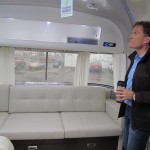 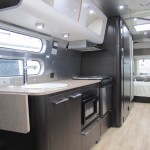 Inside a new Airstream trailer.

The silver bullet known as an Airstream trailer has roamed the nation’s highways since the 1930s. It’s as iconic as a Coke bottle.  The start of summer brings with it thoughts of exploring and camping.  For some people, that means hitching up the Airstream and heading out on the highway.

But consider this, an Idahoan makes on average $33,000 a year.  That’s not enough to buy a new Airstream trailer.  Despite this, a dealership has opened in Nampa. It could be a sign southern Idaho’s economy is on the upswing.

Judy and Duyane Canada are living the Airstream dream.  Duyane has owned those unforgettable trailers for more than 30 years.  He first bought one to live in because he got tired of paying rent.  Duyane still remembers that trailer.

“The interior design of it was beautiful,” Duyane says.  “And the exterior of course was beautiful. They’re functional.  They last forever.  And so I thought, ‘Well, here we have quality at a wonderful price,’ so I just indulged and I’ve never looked back.”

Duayne had that trailer for 26 years and sold it for more than he paid.  Then he bought another one.  After his wife retired, the Meridian couple spent three years crisscrossing the country in the trailer.  Judy says she learned early on that Airstream owners can’t be shy.

“People come over and they will say, ‘Oh, my grandpa had one of those.  Oh, my mom and dad traveled in one of those,'” says Judy.

So why would anyone open up that kind of dealership when the economy is still inching along?  Sales of trailers nationwide took a dip in 2009, but have steadily rebounded.

Boise State University’s John Church tracks and forecasts the local economy. He thinks the dealership has a chance.

“Not too surprising to see an upscale firm of any type look at this market and say, ‘It’s got some legs. It’s going to get better.  And it was good in the past. It should be good in the future'”, Church says.

He says there are good indications the economy might be headed up.  Commercial activity is on the rise in downtown Boise. There’s a skyscraper going up in the heart of the city. Simplot’s JUMP project is underway, and a Whole Foods is taking shape.

Ted Davis thinks the market is perfect for his trailers.  “I firmly believe that there’s not a better market for this product because of the phenomenal outdoors that we have.  I mean you can spend your life exploring the Northwest and never see it all,” Davis says.

So far his strategy has worked.  Davis started his Oregon store in 2010. He opened the Seattle branch last year.  Both locations are leading sellers for the brand, according to Airstream’s President and CEO Bob Wheeler.  “They’ve really been the poster child for how a focused dealership can really succeed and succeed very quickly,” says Wheeler.

He says Davis is among a handful of dealers who focuses on selling one brand.  Wheeler wants to use that model to expand into markets where Airstream doesn’t have much of a presence.  Places like Atlanta, Charlotte, Miami, and Phoenix.

He says half of his customers want a luxury lifestyle.  The others are like Judy and Duyane Canada who want to explore.  For Judy, Airstream represents a community of like-minded travelers.  She says a trip to Oregon last year with fellow Airstreamers made her feel like a kid again.

“We were hiding behind these huge redwood trees and jumping out and scaring each other,” Judy says.  “And one that had fallen, you know, that’s just huge around, you’re trying to look like you’re holding it up.”

The Canadas are back on the road this week. This time they’re headed up to Montana and then Alberta, Canada.  Meanwhile, Ted Davis will officially open his Nampa Airstream dealership on Thursday, confident that the southern Idaho economy will continue to pick up.