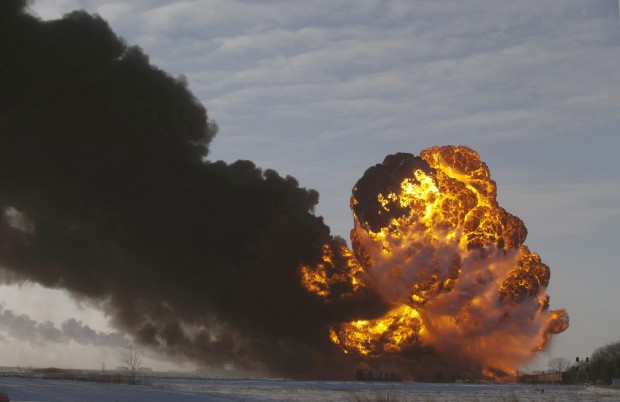 A fireball goes up at the site of an oil train derailment in Casselton, N.D. December, 2013. On Tuesday, March 31, 2015, Bryan Thompson, of Fargo, N.D., the engineer of the oil tanker train involved in the derailment, filed a complaint against BNSF Railway, accusing the railroad of negligence. Thompson says BNSF failed to properly inspect and maintain its equipment.

The Federal Railroad Administration lacks a comprehensive risk assessment for crude-by-rail shipments, as well as rail transport of ethane, toxins and poisonous inhalation materials that travel the nation’s tracks. That’s according to an audit released Friday by the Department of Transportation’s Office of the Inspector General. The OIG says that in the absence of any clear understanding of the risks, the FRA cannot know whether it has effectively allocated its inspection  resources.
The audit also faulted the FRA for not pursuing criminal prosecutions, and issuing the lowest possible fines, which the OIG says do not serve as a deterrent.

“By applying the same penalty to all violations of a regulation, FRA is distancing its enforcement actions from the context of the behaviors they are meant to rectify, thus weakening penalties’ deterrent effect.”

In one instance, two workers were hospitalized when exposed to leaking sulfuric acid and the FRA assessed the lowest possible penalty of $15,000. The audit found that for every 100 violations issued by an inspector, only 4 were recommended for civil penalty. Over the past five years, settlements resulted in an average of $3,800 per violation, or 5.1 percent of the potential $105.6 million dollars the agency could have assessed.

“Inspectors expressed concerns over the deterrent impact of the current penalty levels, with one noting that respondents “just smile and cut the check.”

Despite U.S. Department of Transportation orders for the Railroad Administration to refer potential criminal prosecutions to the Office of Inspector General, the audit found no referrals but estimates 20 percent of civil assessments should have included criminal investigations. The audit found examples of criminal activities including “egregious offenses, falsifications, bodily harm, or environmental impact.”
In one case, a company produced faulty valves that caused leaks of hazardous material. In another case, a company did not provide a bill of lading for radioactive materials.
The FRA responded that deaths and injuries have decreased over the last 10 years, while civil penalties have increased.