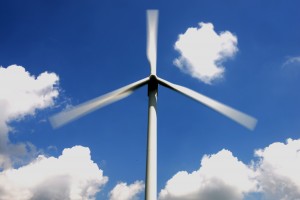 Image #: 18352366 One of six wind turbines of the Somerset Wind Farm is shown against the clouds as the blades rotate on June 19, 2012 near Somerset, Pennsylvania. The wind farm has been operational since 2001 and the six GE 1.5 MW turbines produce enough electricity for 3,400 homes. Plans to develop a 30-turbine Shaffer Mountain Wind Farm nearby were scrapped on June 12, 2012 due to environmental and resident concerns. Wind power has expanded in the United States over the past decade and is now about 3 per cent of all electric power in the country.