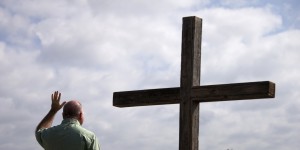 Image #: 22069875 in the town of West, near Waco, Texas on April 21, 2013. Members of the First Baptist Church held their service in an open air field after their church received damage from the explosion. Authorities said the death toll remained at 14 in a community of some 2,700 people, with 200 people injured. REUTERS/Adrees Latif (UNITED STATES – Tags: DISASTER ENVIRONMENT AGRICULTURE RELIGION)