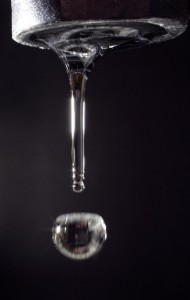 KNUTSFORD – UNITED KINGDOM – MARCH 13: A domestic tap drips water on March 13, 2006, England. Thames Water the UK’s biggest water company has imposed a hosepipe ban in the south of England along with five other companys. Most of England and Wales has only received a third of their average rainfall and reservoirs in the South East particularly Sussex and Kent are low for the time of year bringing increased fears of a drought this Summer. ()