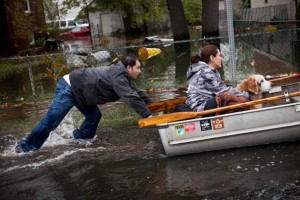 LITTLE FERRY, NJ – OCTOBER 30: The storm has claimed at least 16 lives in the United States, and has caused massive flooding accross much of the Atlantic seaboard. US President Barack Obama has declared the situation a ‘major disaster’ for large areas of the US East Coast including New York City. ()