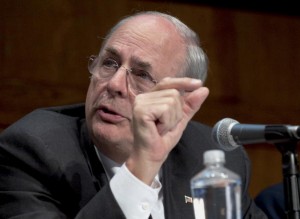 WASHINGTON – JUNE 17: In this handout image provided by NASA, Norman Augustine, chairman of the Human Space Flight Review Committee, an independent body reporting to the NASA administrator, makes a point during the first of several public meetings to be held at different U.S. locations June 17, 2009, at the Carnegie Institution in Washington, DC. The panel is examining space flight options after the space shuttle program is retired in 2010. The committee is to present its results in August. ()