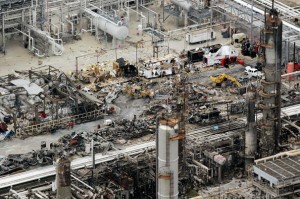 TEXAS CITY, UNITED STATES: A birds eye view of the wreckage at the BP facility in Texas City 55 kilometers (35 miles) south of Houston, 24 March 2005, after an explosion 23 March. The death toll from an explosion at the third-biggest oil refinery in the United States rose to 15 24 March as investigators sifted through debris at the huge BP facility. The London-based energy group said terrorism was not suspected, but it was still working to pin down the precise cause of the explosion. AFP PHOTO/William PHILPOTT (Photo credit should read WILLIAM PHILPOTT/AFP/Getty Images)