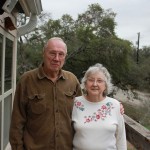 Harold and Nell Myers live in Lakeside Beach. He used to manage the community’s water system before it was sold to LCRA. 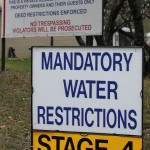 Spicewood Beach was placed under stage 4 water restrictions on Tuesday, meaning residents can only use water for cooking, cleaning and drinking. 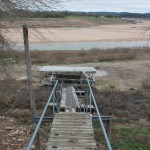 A beached boat dock on upper Lake Travis near Spicewood Beach sits dozens of feet from the water’s edge. 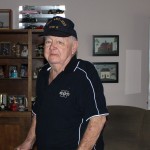 Clayton “Buddy” Howell, a Navy Veteran shares a modest home with his daughter in Spicewood Beach. 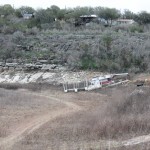 Boat docks that once floated on Lake Travis now sit on dry ground in Spicewood Beach. 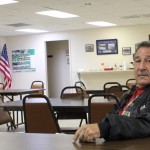 Joe Barbera, the current president of the Spicewood Beach POA, sits in the community recreation center. 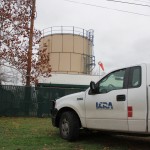 LCRA trucks parked outside a water pumping station in Spicewood Beach, where workers took measurements for the river authority engineers. 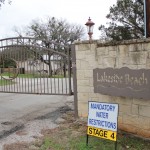 The Lakeside Beach community, along with Spicewood Beach, was put under stage 4 water restrictions Tuesday. 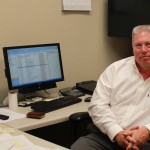 Andy Uhler and David Barer of KUT News contributed reporting to this article.

(Update: On Monday, January 30, the wells in Spicewood Beach began to fail, and water was trucked in. It was the first time during the current drought that a Texas town has run out of water. Read our latest reporting on the story here.)

The drought has come close to drying up several small Texas towns. Without exception they’ve all been spared, whether through rain, new water pipelines, or a mix of the two. But for the first time since the drought began, within a few days, one community’s well is expected to run dry.

Spicewood Beach sits on a peninsula along the northern reaches of Lake Travis. Inflows into the lakes that provide for the region are at a historic low, while water demand is at an all-time high. The two main water sources for Central Texas, Lakes Buchanan and Travis, are currently only at a combined 37 percent of their full capacity.

There are 500 water meters in the Spicewood Beach area, serving an estimated 1,100 people. Water is drawn from wells managed by the Lower Colorado River Authority.

The irony of running out of water right next to a lake isn’t lost on locals like Joe Barbera, who is president of the Spicewood Beach Property Owner’s Association. “If you go down there, it’s nothing but sand,” he says. “If you actually walk down there, it’s unbelievable how far you have to go down to the creek bed just to see water.”

How Did This Happen?

Around here he’s known simply as “Buddy.” But his given name is Clayton Howell, an 85 year-old retired Navy vet who lives in a single-story home next to a golf course. Until about six months ago, you’d find him playing nine holes a day there. Now he’s more or less confined to his La-Z-Boy with a bad back problem. Over a late breakfast, he tells the story of how the local water wells came to be the property of the LCRA, and why they’re beginning to run dry. Clayton "Buddy" Howell, a former Spicewood Beach POA, in the home he shares with his daughter.

Howell moved out to Spicewood Beach in 1976 and helped build the wells that this community still uses for water. A decade or so ago, the Lower Colorado Authority came knocking. They wanted to buy and further develop the water wells. Howell was on the water board at the time.

“It’s just more work than a neighborhood could stand,” says of the water wells. “That’s the reason we gave it to LCRA. A bunch of people on retirement, little income. You couldn’t talk ‘em into spending money on this joker.” Howell says the neighborhood got together and decided it would be best to sell the wells to the LCRA, then buy back the water as customers.

Howell says the LCRA came in and fixed most of the patchwork he and other residents had done over the twenty-five years on the wells. He says he never heard anyone in the neighborhood complain about selling the wells to the LCRA… until now. Joe Barbera, the current president of the Spicewood Beach POA, sits in the community recreation center.

“I’m dumbfounded,” says Joe Barbera. “I’ve never been in this kind of predicament.” Barbera is a handyman of sorts for the community, filling the many empty hours of retirement by going around town to fix whatever happens to be broken at the moment. Today’s task is doctoring Howell’s La-Z-Boy, but it’s clear he’d rather come up with a solution to the dying well.

What’s to blame? The LCRA says it’s the drought, which has been going on for well over a year. “It is all a function of the drought,” LCRA spokesperson Clara Tuma says.

But that answer isn’t good enough for the people that live in Spicewood Beach. “Are we gonna go back to the old days where we got to carry [water] in by the buckets?” asks Barbera.

Actually, that’s basically what the LCRA will be forced to do. “When this well fails, and we assume that it’s going to fail at some point, we would truck water in,” says Ryan Rowney, the LCRA’s manager of water operations. It would take four to five loads a day to meet the community’s water needs once the well runs dry any day now. With each load carrying about 4 thousand gallons, it’s not going to be cheap.

“I don’t have an answer yet on how the costs are going to be allocated. I will tell you that it won’t be as cheap as being able to pump it out of the earth,” Rowney says.

A Beach With No Water

While the lakefront location of the community and streets named “Golf Course Drive” give the impression of an opulent neighborhood, the reality is that Spicewood Beach is largely populated by double-wide trailers and retirees on modest budgets. Harold and Nell Myers live in Lakeside Beach. where Harold was president of the Lakeside Property Owner's Association and managed its surface water treatment plant.

Harold Myers and his wife, Nell, live together in the Lakeside Beach community, which now gets its water from the Spicewood Beach water system. They embody the frugal retirement set that has settled here, with a wood-paneled den decorated with an eclectic array of Norman Rockwell prints, generic landscapes and religious paintings. Their shelves are taken over by swathes of family photos, many of them portraits of their grandchildren.

Myers used to manage Lakeside Beach’s surface water treatment plant before the LCRA purchased it along with the other wells in the area. About a year after that plant was purchased, Myers says the LCRA shut it down because it was too costly to run. But in doing so, the LCRA also shut down a contingency plan to provide water to the community. He says that although he has less knowledge about water management than they do, at least he always had a back-up plan.

The community has now been moved to Stage 4 restrictions, which ban all outdoor watering and permit only the “essential use” of water. “I mean, we can’t conserve any more,” says Joe Barbera. “We need water in the house. We need toilets, showers.” Residents can cook, clean and wash with water, but that’s about it. “How can you cut back any more than that?” he asks.

A Forecast Full of Doubt

While much of Central Texas was drenched in rain this week, with parts of Austin getting over six inches of precipitation, the area around Spicewood Beach only received one to two inches. “From what we’re seeing there just wasn’t a whole lot of [water] runoff based on that,” says Bob Rose, a meteorologist with the LCRA. The area still needs 10 to 20 inches of more rain to get lake levels up in the Highland Lake region, according to Rose.

And even when rains do come, the effect on the wells isn’t immediate. It takes time for rainwater to make its way into wells from aquifers. In the case of the wells at Spicewood Beach, it takes about four to five days for the rainfall to have an effect.

The Texas Commission on Environmental Quality (TCEQ) said that this would be the first time, to their knowledge, that water had to be transported by truck to a community since the drought began. “Our responsibility is to make sure that the water supplied to customers meets drinking water standards,” says Andrea Morrow, a spokesperson for the commission. “It’s the responsibility of the water supply company to supply their customers.” Morrow says that while the TCEQ also assists systems that are in trouble to help them find alternate sources of water, she’s “not sure that we’ve had much chance to do that yet” in Spicewood Beach. “We weren’t aware until recently [of the problem],” she says.

While trucks might quench the community’s thirst for the near future, that’s not a long-term solution. A beached boat dock on upper Lake Travis near Spicewood Beach sits dozens of feet from the water's edge.

The LCRA said Monday that the community was a few weeks away from running out of water. But after the well dropped over a foot that night, on Tuesday they revised their estimate. They now say that Spicewood Beach could run out of water within days.

Complicating matters is the fact that the wells that provide water to the community are up for sale. In November, the LCRA announced that the Spicewood Beach system was one of 18 municipal water systems that it intended to sell to a Canada-based utility company, Corix. The company provides water to “more than 220 water and wastewater systems that serve 650,000 people in North America,” according to LCRA’s announcement of the sale. LCRA trucks parked outside a water pumping station in Spicewood Beach, where workers took measurements for the river authority engineers.

Why is the LCRA selling water in the midst of a record single-year drought? It’s part of a November 2010 decision. The LCRA said at the time that they didn’t think owning and operating retail water systems played to their strengths. They see themselves more as a regional water and power provider, not a manager of retail systems.

Spicewood Beach and other water systems in the Hill Country that the LCRA is negotiating to sell to the Canadian company were purchased and developed by the LCRA over the last 10 to 15 years. “In many cases, LCRA purchased the systems to help meet the environmental needs and economic development goals of the local communities,” the LCRA said when announcing the sale. “However, despite cutting costs and raising rates, these systems do not cover their costs and are subsidized by more than $3 million a year.”

Figures like that raise the question why a company would want to buy these water systems in the first place, and how much they may have to raise water rates in those communities if the purchase goes through. Calls to Corix about the pending sale were not returned before deadline.

There will be a public meeting to discuss the water issues in Burnet County tonight at 6pm at the Burnet Community Center at 401 East Jackson Street. There will be panelists on hand from the Lower Colorado River Authority, the Texas Commission for Environmental Quality, and Texas Water Development Board.

A map of Spicewood Beach:

StateImpact Texas and KUT news will be reporting more on this story in the days and weeks to come. Read our reports here or listen online at KUT.org or on the radio at 90.5 FM.