David Kitner works inside his pizza shop in Middletown on Friday, March 1, 2019.

'There’s bailouts for almost any major industry at some point,' David Kitner said 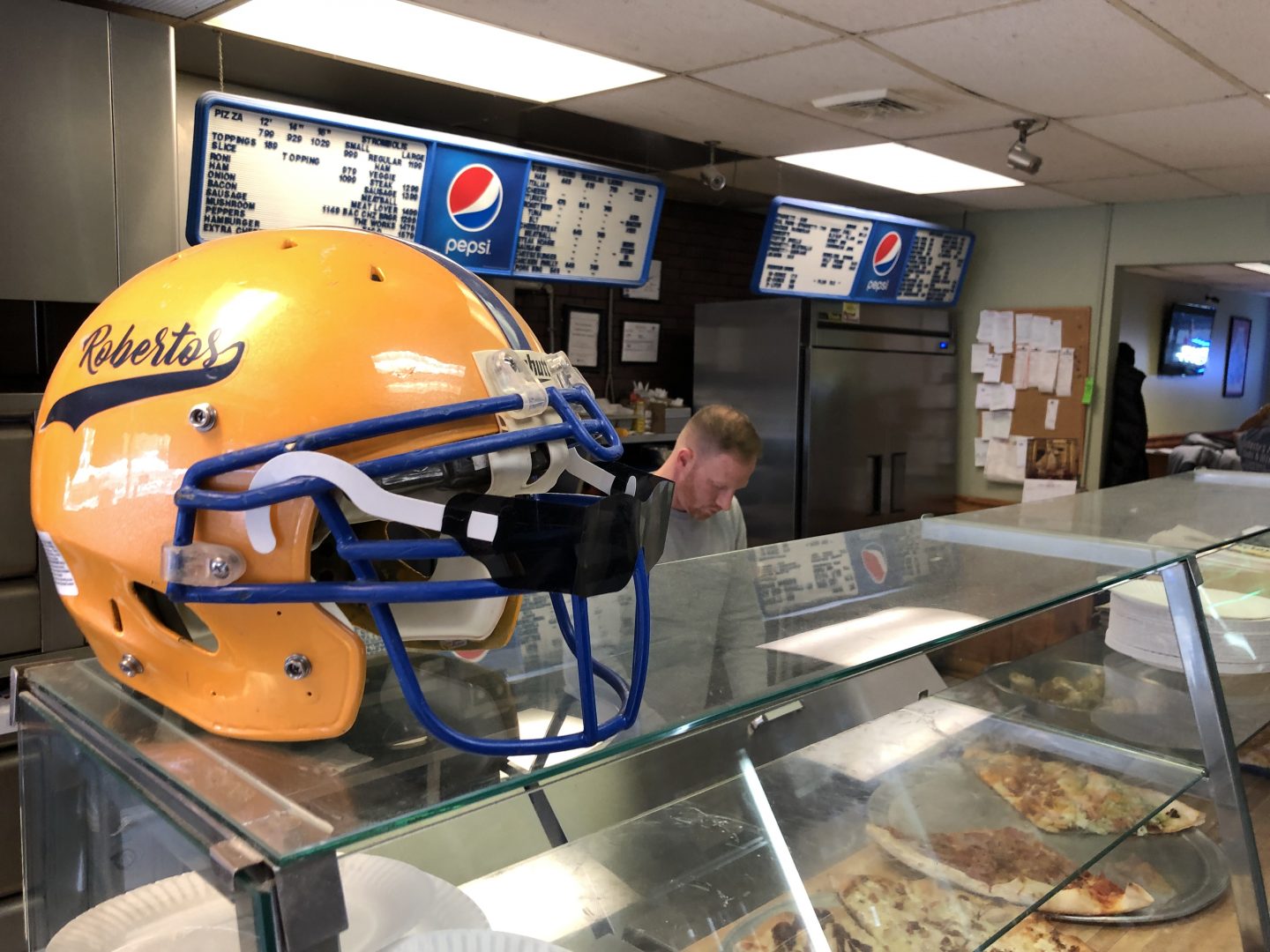 David Kitner works inside his pizza shop in Middletown on Friday, March 1, 2019.

March 6, 2019 | 4:00 AM
This March marks the 40th anniversary of the partial meltdown at the Three Mile Island nuclear power plant. PA Post is collaborating with WITF and PennLive on a multimedia, monthlong look at the accident, its impact and the future of TMI and the nuclear industry. That includes new documentary television and radio programs, long-form audio stories, photos, and digital videos. The work will include the voices of people affected as well as community events to engage with listeners, readers and viewers.

(Middletown) — When the nuclear power station needed to be refueled, more than one thousand extra workers headed to the plant.

And when those workers got hungry, many of them turned to Roberto’s Pizza & Subs in Middletown, about three miles away from the plant.

The pizza shop is on the same street as a brewery that sells a beer called TMIPA. Across the street, there are a couple of empty storefronts. David Kitner has owned the pizza shop for about 15 years.

Typically, Three Mile Island accounts for 10 to 15 percent of the annual revenue at Roberto’s. Refueling years — and the hundreds of extra pizzas a day that are ordered — can bump up the revenue by several more percentage points.

Nuclear reactors typically have those refueling periods every 18 to 24 months — it’s when the reactors stop generating electricity so that fuel can be replaced and other maintenance work can be completed.

It’s a time Kitner looks forward to. And he’s worried the boost to his shop — plus the regular business the plant provides — will come to an end, as Exelon plans to close Three Mile Island this fall unless state lawmakers intervene.

When Exelon announced the closure plan two years ago, it said it employed 675 workers and contracted with another 1,500 local union workers for periodic refueling. It sends $930,000 a year in property tax payments to the local school district, Dauphin County government and its local township. 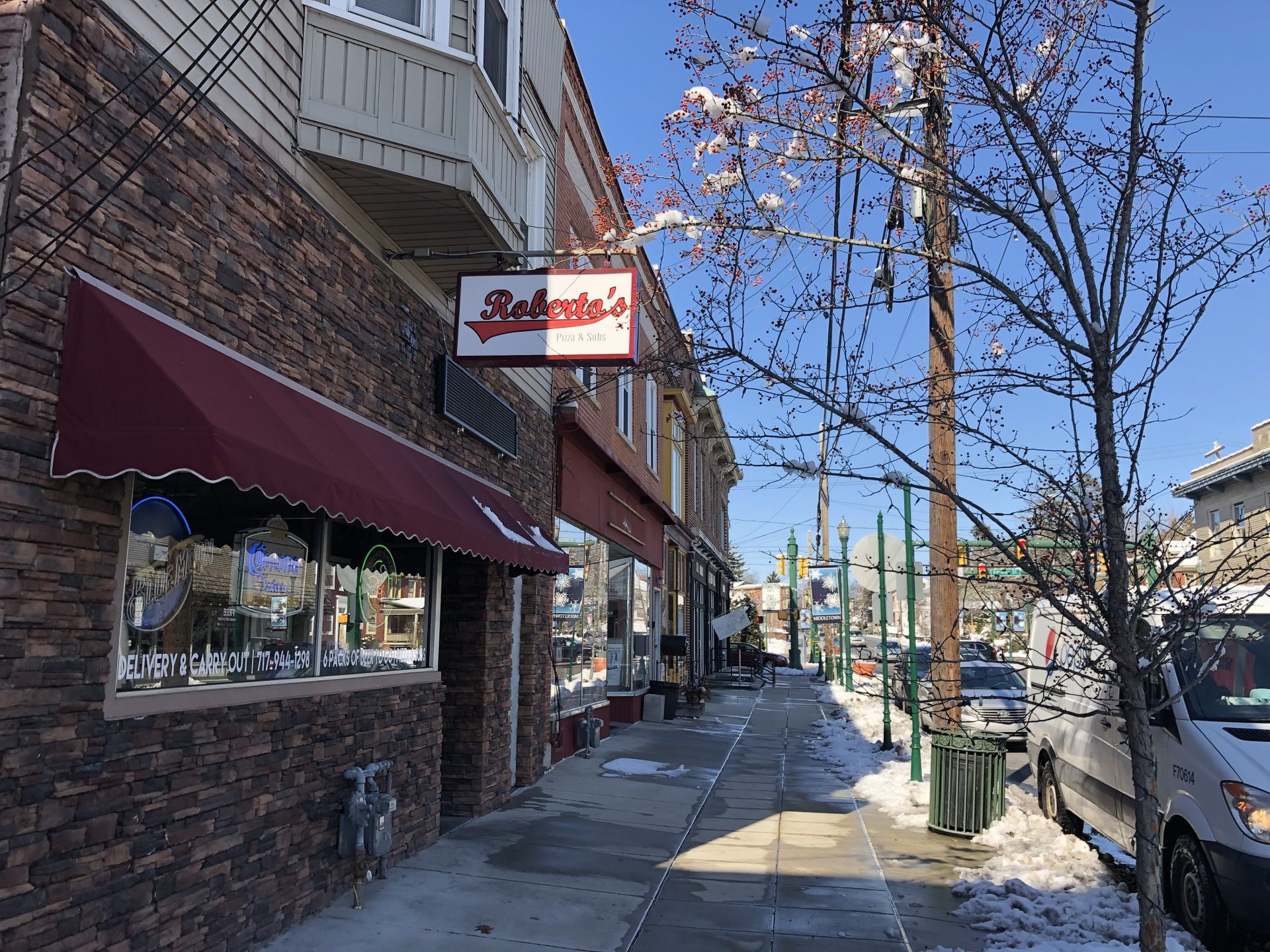 Those are some of the reasons that Mike Pries, a Dauphin County commissioner, thinks the plant is worth saving.

“The impact will be felt throughout central Pennsylvania and the region,” Pries said.

Some lawmakers plan to introduce legislation that would require utilities to buy a certain amount of electricity from nuclear plants. That rule already exists for wind, solar and certain other energy sources. Opponents of the measure say a bailout of the nuclear industry would lead to higher rates for consumers.

Robert Reid, who was the mayor of Middletown when the partial meltdown occurred at Three Mile Island in 1979, used to oppose the plant. Now he wants it saved.

Steve Letavic objects to the idea of calling it a “bailout.”

Letavic is the manager of Londonderry Township, a community of about 5,000 people and home of the nuclear power plant. It’s a mostly rural township — 84 percent of the land there is agricultural, Letavic said.

He argues that people need to consider the economic benefits of nuclear energy, as well the environmental benefits. Because nuclear reactors don’t produce direct carbon dioxide emissions, some backers of nuclear energy see it as a way to fight climate change.

“This is certainly not a bailout,” Letavic said during an interview at the township office. “And it’s a played word, and it’s a frustratingly tiring word.”

How much the school district, township and county could lose

In 2008, after a dispute over the value of the land for tax purposes, Exelon agreed to make payments to the township, school district and county in addition to the property taxes owed. The parties extended the agreement in 2017 for another two years. 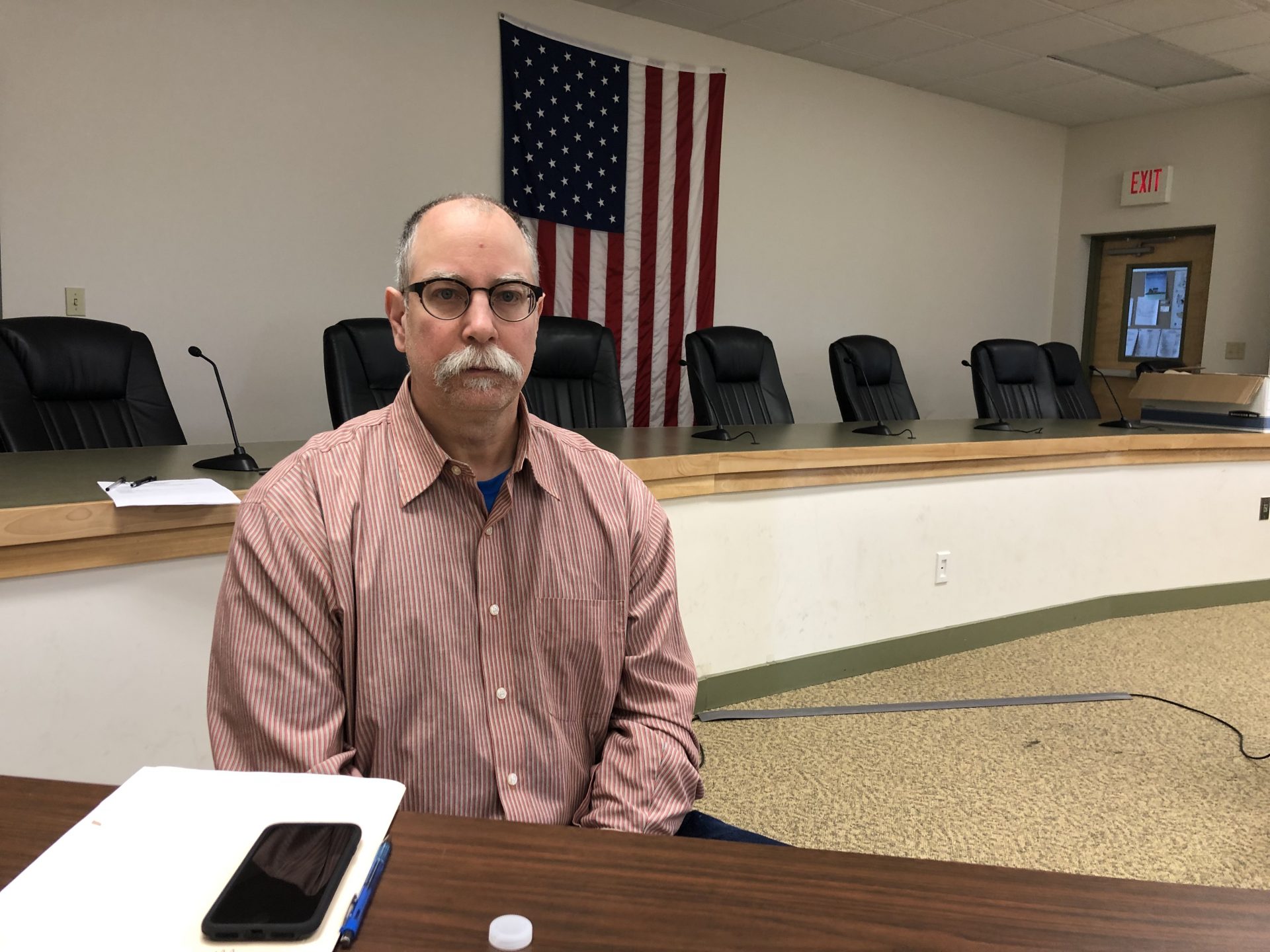 Steve Letavic, the manager for Londonderry Township, is seen at the township building on March 1, 2019.

For the school district, the deal means that about half the money it receives from Exelon comes from regular property taxes, while the other half is from additional payments.

If TMI closes, Lower Dauphin School District spokesman Jim Hazen expects those additional payments to end right away. And he said Exelon could further lower its property tax bill by seeking a lower assessed value for tax purposes. The district’s total budget was more than $63 million in 2017-18.

Letavic said Exelon’s regular employees also pay about $130,000 a year in earned income taxes to the township. The company helps fundraise about $50,000 a year for the local fire department through a charity golf outing.

Decommissioning a nuclear power plant requires workers, but Letavic expects that work will involve a lot fewer of them. Exelon didn’t respond to questions from PA Post on the issue.

More broadly, Letavic worries about the change for the entire community. He has family from western Pennsylvania, and he has seen what happened to communities when coal and steel industries left. He fears a similar impact if nuclear leaves.

“I go back to the towns that were once thriving, proud towns … and it is just completely depressing,” Letavic said. “Since those industries have dried up out there, those towns are now downtrodden.” 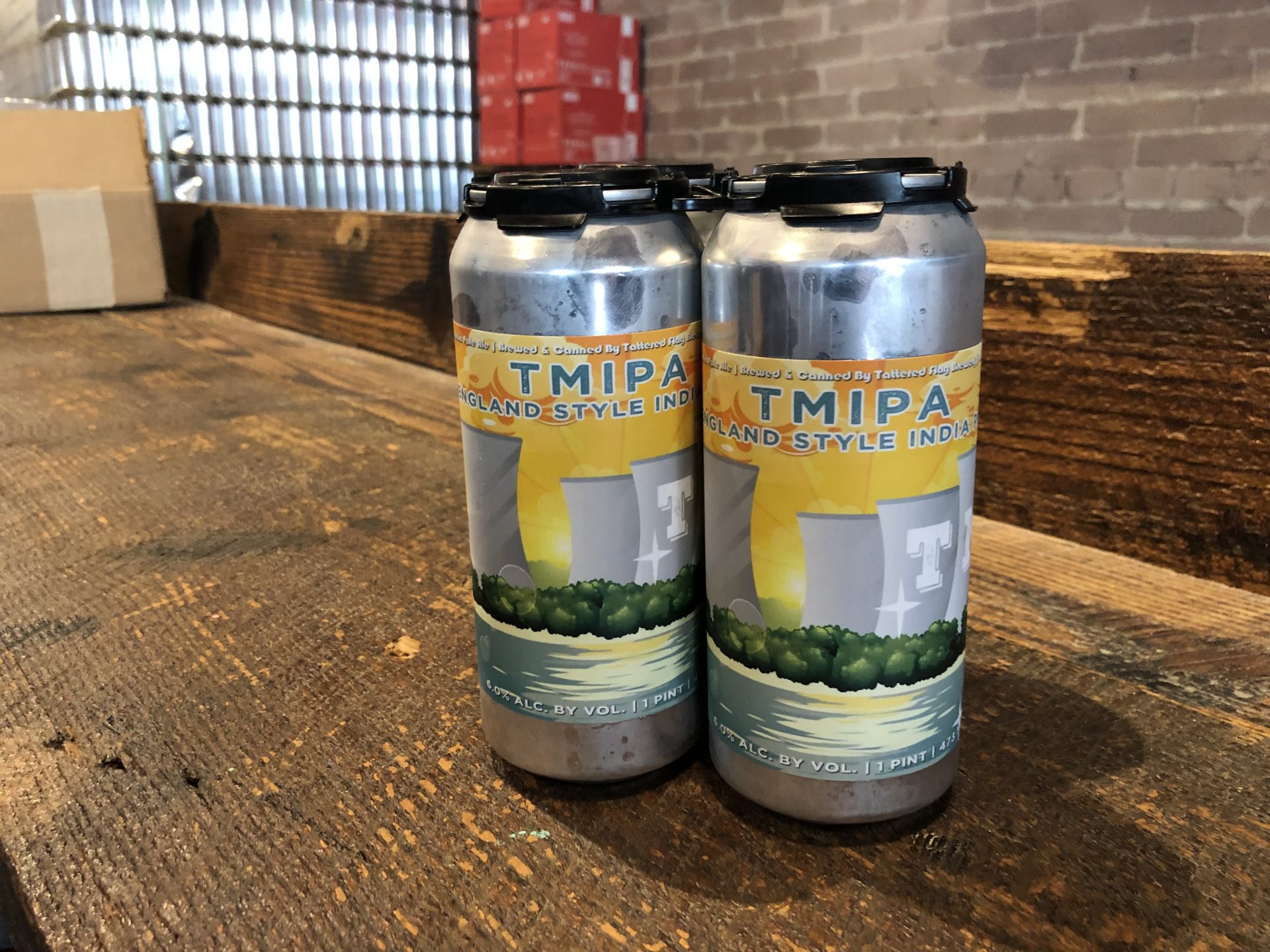 David Black, president and CEO of the Harrisburg Regional Chamber and Capital Region Economic Development Corporation, doesn’t think there will be the same kind of impact on the region if TMI closes.

But, he said, when you look at jobs lost compared to the number of jobs in the entire region, “it’s not that big of a number.” He said the Harrisburg metropolitan area has a workforce of about 300,000. Plus, Three Mile Island draws workers from the York and Lancaster areas.

Dauphin County has a fairly diverse economy and a recent unemployment rate of 4.1 percent.

Exelon doesn’t rank in the top 10 employers in the county.

Right now Black’s group is neutral on a state intervention.

Black has doubts about whether the legislation would even save Three Mile Island long-term. The plant has been operating with only one reactor ever since the partial meltdown in 1979.

“There are coalitions on both sides of this issue. And we are not officially involved in either one,” Black said. “Although we’re trying to tap the information that they put out to learn.”

Kitner, the owner of Roberto’s in Middletown, is a member of a coalition trying to save Three Mile Island.

He doesn’t worry too much about the bailout label.

He doesn’t think his business would be at risk of closing if TMI does. But he expects he would have to cut back on drivers and other workers.

Why the former mayor changed his mind

Reid, the former mayor of Middletown, has had a complicated relationship with TMI.

He has lived in Middletown most of his of life and now lives near the airport that gave Three Mile Island its name — the island is three miles away from Harrisburg International Airport. 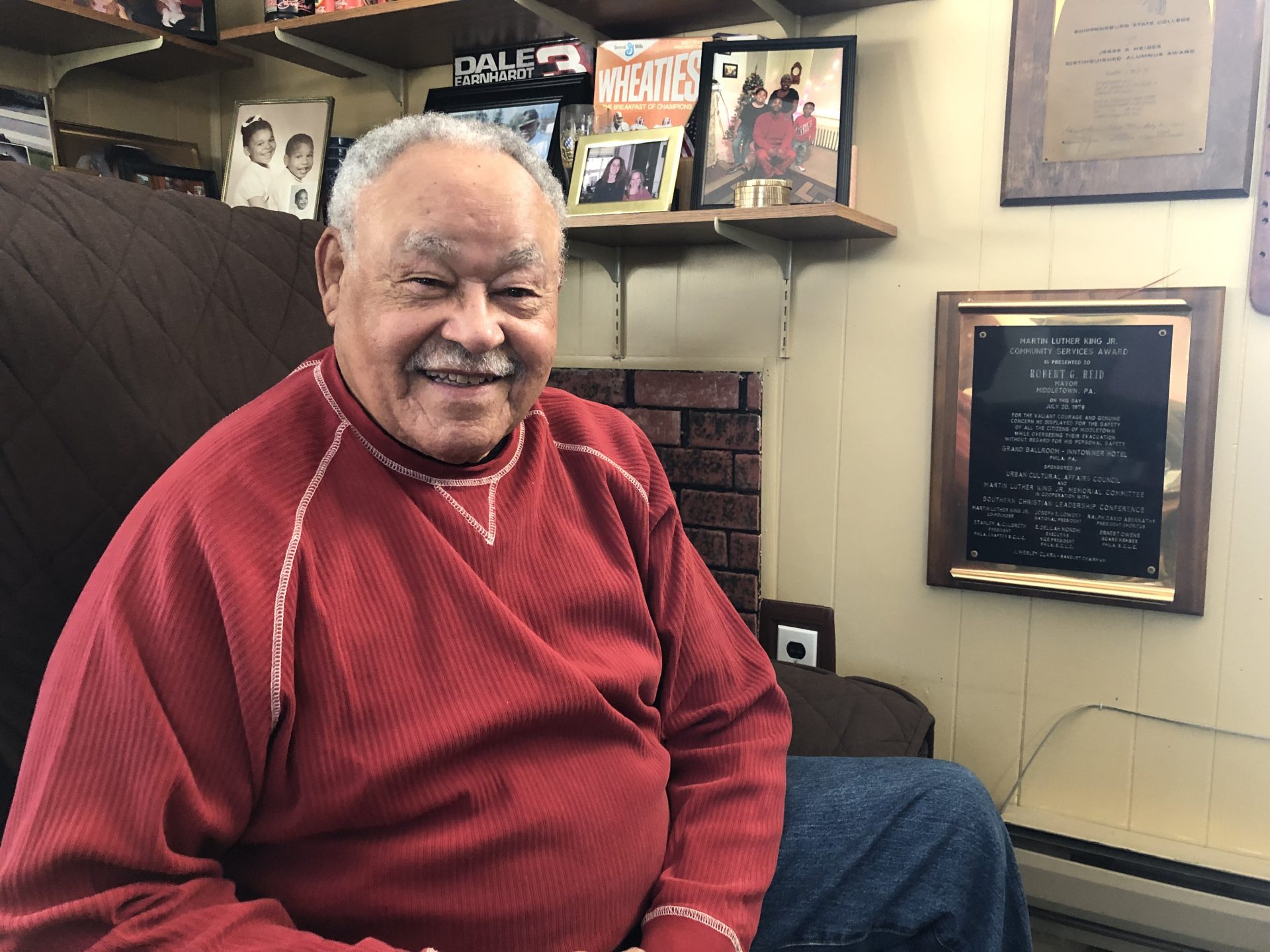 When the plant was being built, he liked the idea. He thought it would bring jobs — but also it just seemed interesting.

“I thought it was something new, and I could brag to people and say, ‘Well, you don’t have a nuclear plant in your backyard. I do,’ ” Reid said.

In 1977, he was elected mayor of Middletown.

Then there was the accident on March 28, 1979, the inability to get good information, the release of radiation, the wondering which way the wind would blow, and the panic.

Reid stayed in town through it all — but he urged his wife to evacuate. She did, taking their youngest son to a relative’s house in Connecticut.

After the accident, Reid said he was “dead set” against the plant opening back up. So were a lot of others.

In 1982, residents in three counties voted in a non-binding referendum against a restart of the Unit 1 reactor, according to newspaper archives. The margin was 2-1 against.

But Reid thinks many people would vote differently now.

He thinks the United States needs a lot of energy options. And he thinks the current owners have a better relationship with the community.

“It’s a whole different program down there now,” Reid said.

Still, Reid doesn’t think the TMI closure would be a major blow to Middletown. There are a lot of different industries here, he said.

“But any time you take anything away from an area that’s contributing to the economy — you take that away, it’s going to hurt a little,” Reid said.