This February 2018 photo shows the most recent proposed route for the PennEast pipeline through Albertine Anthony's farm in Palmerton, Pennsylvania. The route cuts through a triangle of unfarmed wetland that is the source of Anthony's home water supply. 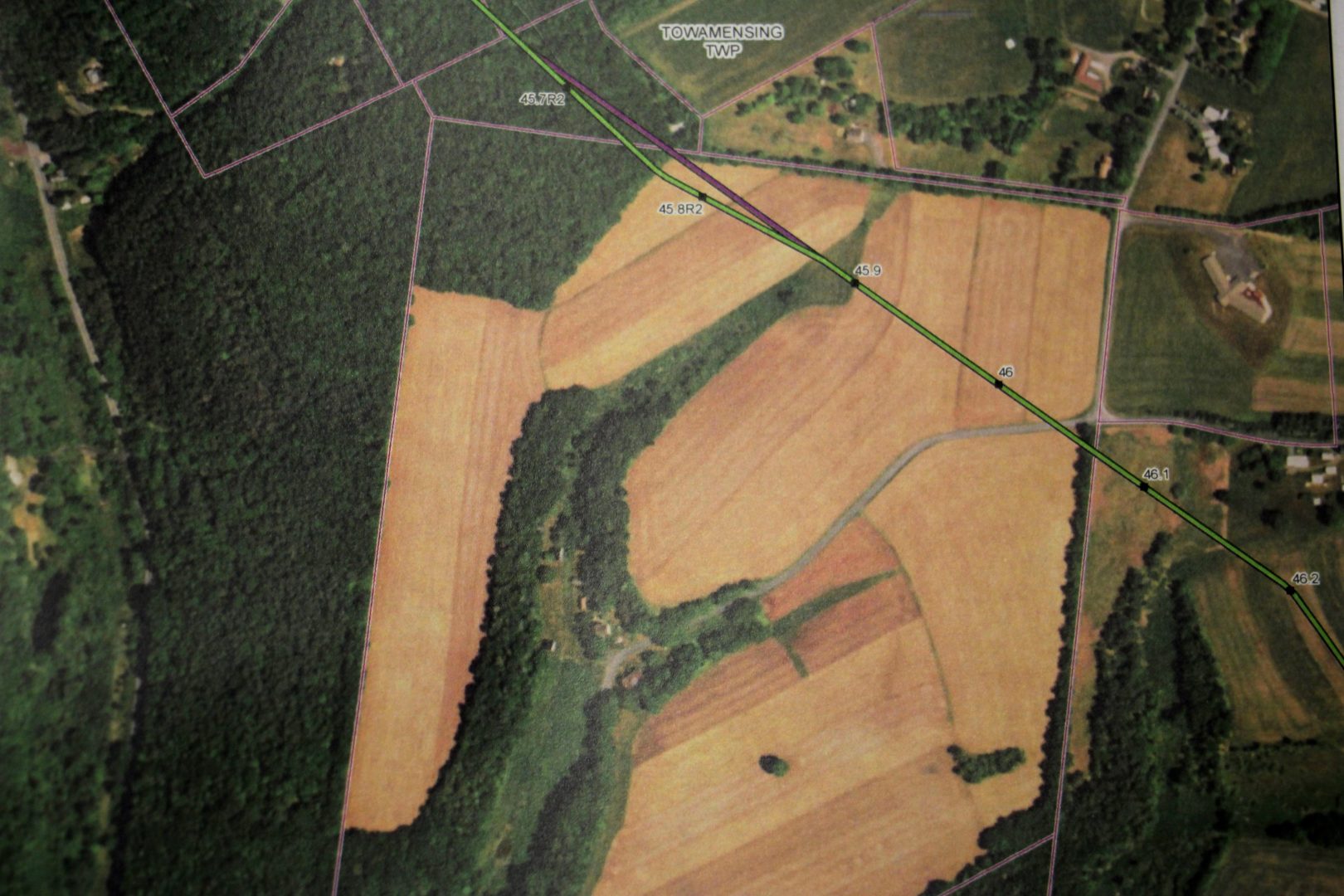 This February 2018 photo shows the most recent proposed route for the PennEast pipeline through Albertine Anthony's farm in Palmerton, Pennsylvania. The route cuts through a triangle of unfarmed wetland that is the source of Anthony's home water supply.

The Delaware River Basin Commission asked a federal regulator to prevent PennEast cutting trees in the basin before it issues any approval for its controversial natural gas pipeline project in Pennsylvania and New Jersey, according to documents released on Wednesday.

But its request was not considered by the Federal Energy Regulatory Commission because it was not sent through the proper channels, a FERC spokeswoman said. The DRBC confirmed it had asked FERC to block early tree clearing by PennEast but had not received a reply. It said later that it will resubmit the letter.

Tamara Young-Allen, a spokeswoman for FERC, said the DRBC’s request has not been considered because the letter was not sent to the agency’s secretary, Kimberley Bose, as required, but to an official in the Office of Energy Projects.

If DRBC resubmits the letter through the proper channels, its request will be considered, Young-Allen said.

The documents were published by the environmental group Delaware Riverkeeper Network, which earlier this year urged DRBC to stop PennEast from doing any construction-related activities, including tree-cutting, until the interstate agency decides whether to issue permits.

In a letter to FERC in April, DRBC asked the agency to amend its certificate approving PennEast so that the company could not cut trees in the basin “until such time as the DRBC issues an approval for the project or activity.”

DRBC, which represents the basin states of Pennsylvania, New Jersey, New York and Delaware plus the federal government, said it anticipates that PennEast might want to start cutting trees early in view of the many months it would take to build the 120-mile pipeline.

“The DRBC is concerned that the premature felling of trees could result in water resource impacts related to stream bank stability, soil erosion, and instream sedimentation that could go unmitigated unless and until the pipeline is actually built,” the agency said.

The agency’s request recalls Constitution Pipeline’s felling of several acres of maple trees on a northeast Pennsylvania farm in 2016 to make way for a pipeline that failed about a month later to get a crucial permit from New York state.  That project now appears to be dead after a series of judicial and regulatory setbacks, while the landowners, the Holleran family, are seeking compensation for their lost trees.

Riverkeeper network head Maya van Rossum praised the river basin commission for asking FERC to deny any plans for tree clearing. She said DRN wants to avoid a repetition of the Constitution “debacle” but is also trying to remove one argument that FERC may use to overturn legal opposition to pipeline projects.

If trees are already cut, FERC may argue in court that a project is too far along to be denied, and seek to block all legal challenges, she said.

“We don’t want any undue and/or premature damage inflicted and we don’t want to see any undue pressure placed on the agencies because work has already begun in earnest on a project before all decisions are made,” van Rossum said.

Pat Kornick, a spokeswoman for PennEast, declined to say whether the company plans to cut trees before getting any DRBC permit, but appeared to leave open that possibility.

“At the appropriate time, PennEast will proceed within the limits of the approvals that have been granted,” she said.

PennEast anticipates beginning construction in 2019, Kornick said, later than its earlier plan for 2018.

FERC approved the project in January, but it still needs permits from the DRBC and the New Jersey Department of Environmental Protection. Those agencies could come under more pressure to approve the project if the company cuts trees before they have decided whether to issue permits, van Rossum said.

The project also needs approval from a federal judge in New Jersey who is deciding whether to grant the company’s eminent domain petitions on about 150 landowners who declined offers of compensation for building the pipeline on their properties.

Van Rossum said DRN obtained the DRBC letter through a Freedom of Information Act filing with the agency.