Heavy rain suspected of playing a role, as it did during earlier problems with the pipeline 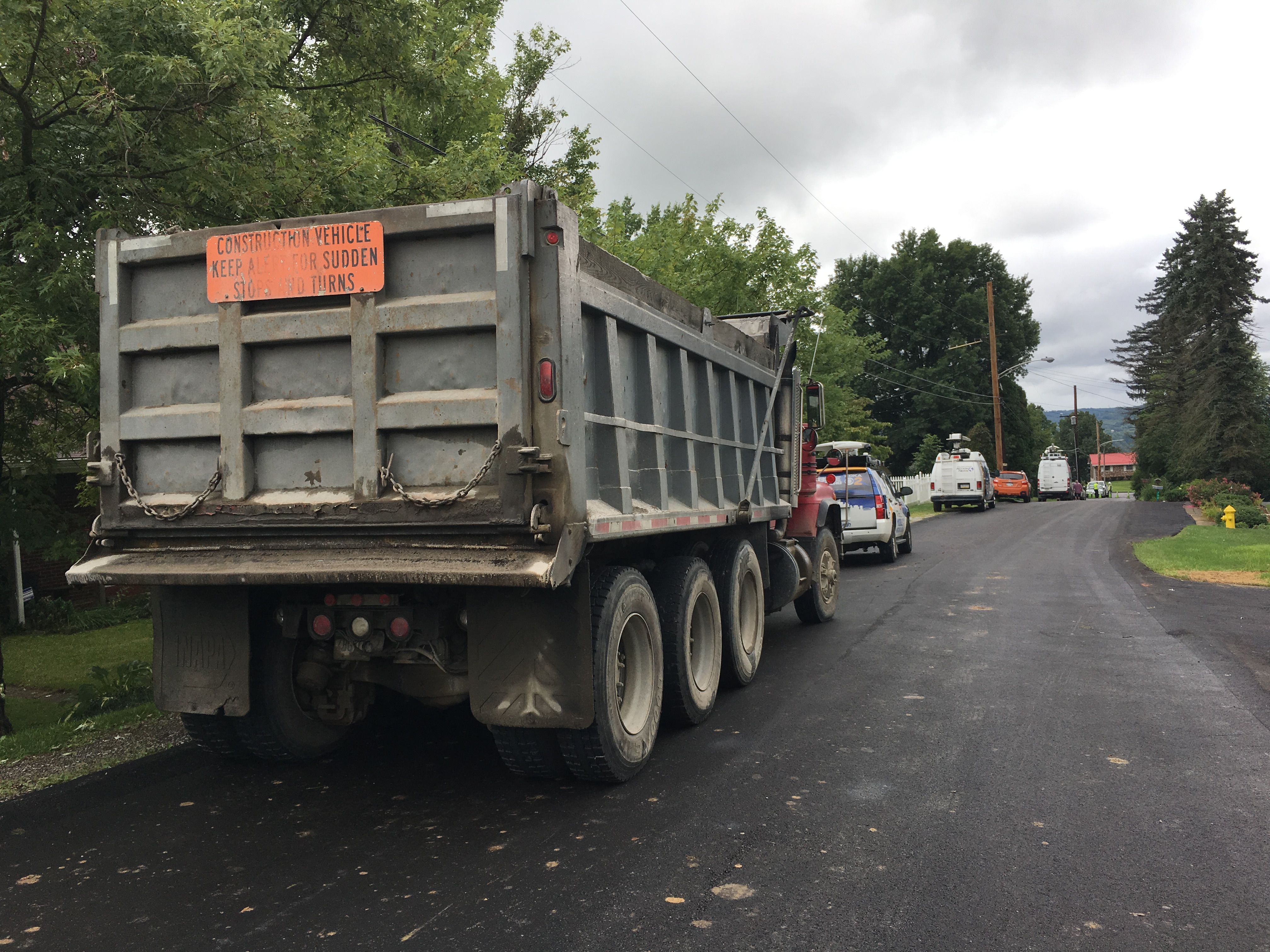 Traffic along Ivy Lane in Beaver County’s Center Township was unusually busy Tuesday with officials and crews trying to access the pipeline explosion site and downed power lines. Security blocked access to all but authorized personnel.

Energy Transfer Partners has shut down part of the Revolution Pipeline as officials investigate why a section of it exploded in a Beaver County residential neighborhood on Monday.

“Right now the line has been isolated and depressurized and it will remain that way throughout the investigation,” company spokeswoman Alexis Daniel said. “As part of that investigation we will perform another inspection of the area all along the route.”

The company shut down the line from a compressor station in Beaver County to a location in Butler County.

One home was destroyed, but no one was injured in the blast along the Revolution Pipeline shortly before 5 a.m.

On Tuesday, investigators from the Pennsylvania Public Utility Commission were looking into what caused the blast. Officials suspect that heavy rains led to a landslide that caused the pipeline to break and explode.

“We believe that may have had an unusual amount of stress in the area on the land that may have possibly contributed to it,” Daniel  said.

The recently-completed pipeline had already experienced rain-related problems during construction months before.

The problems with erosion along the Revolution Pipeline were at different parts of the line than where the blast occurred, said Jim Shaner, executive director of the Beaver County Conservation District, which oversees the erosion and sedimentation plans for construction projects in the county. Heavy rain contributed to those issues, he said.

In June, the company agreed to pay a Department of Environmental Protection fine of $145,250 for discharging “sediment-laden runoff” into Raccoon Creek and an unnamed tributary.

Shaner said most erosion permits for construction projects are designed to withstand 100-year storms. But he said this weekend’s rains, which dropped more than 5 inches of rain in Beaver County, may have been too much.

Energy Transfer Partners says the line was a 24-inch natural gas gathering line, a type of line that typically transfer gas from wellheads to a larger transmission line. It was built to feed two major ETP pipelines, the Rover pipeline and the Mariner East 2 natural gas liquids line. Daniel said the company’s monitoring system detected the blast and valves were closed. The fire burned out in about two hours, she said.

Around 4,000 electricity customers lost power as a result of the explosion, but all had their power restored by Tuesday afternoon, Duquesne Light spokeswoman Jessica Rock said in an email.

The fire burned through power lines on a high-voltage transmission line nearby, toppling metal towers, said West Penn Power spokesman Todd Meyers. Replacing the towers, which can reach 100 feet in height or taller, would be a long process, Meyers said.

“Some of them may need to be replaced completely others we might be able to repair, but it’s going to be a job it may take four or five weeks,” Meyers said. 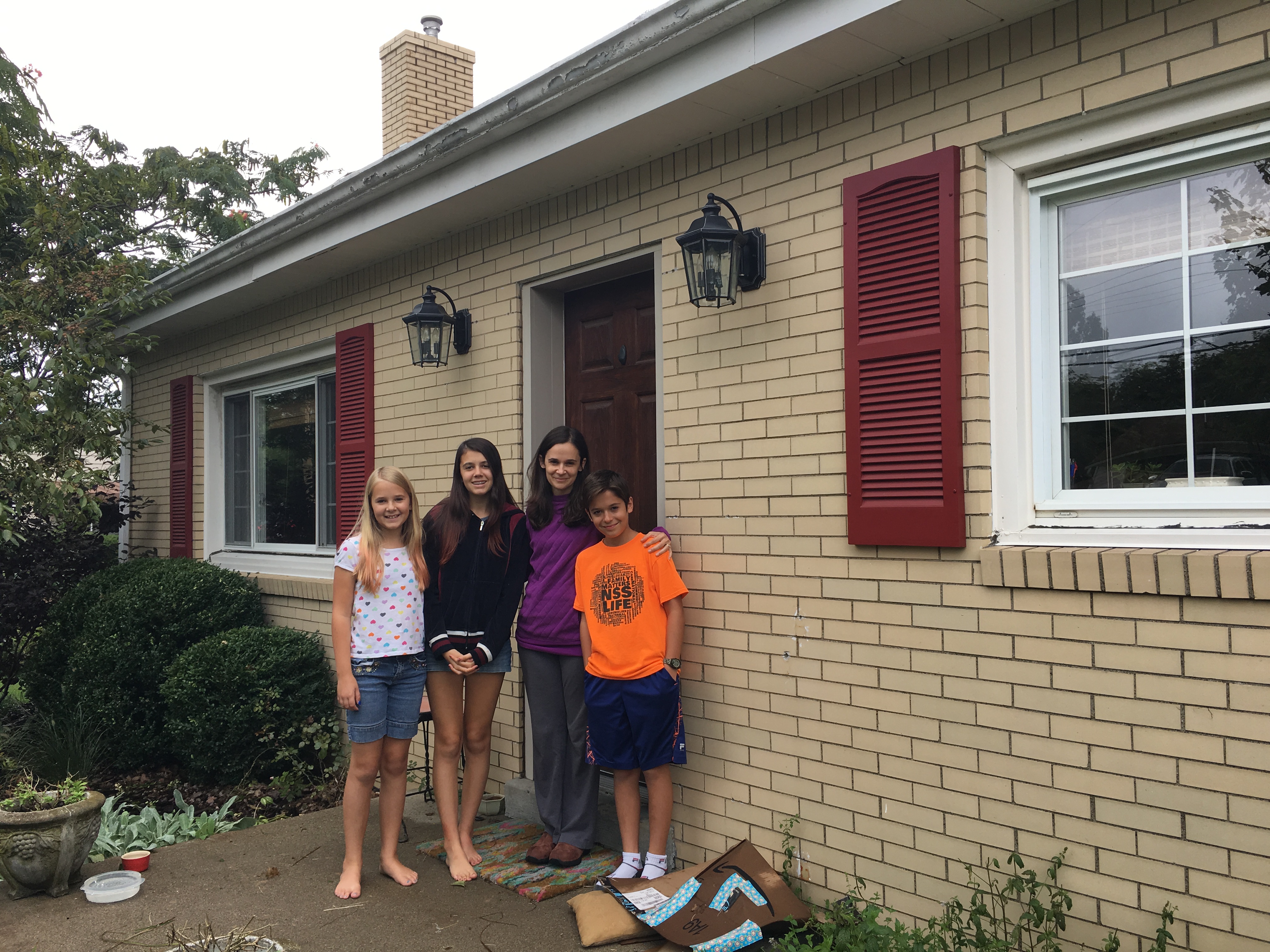 The Herbster family stands in front of their Center Township home Tuesday, the day after evacuating a nearby gas pipeline explosion. They drove to stay with family in Grove City in Mercer County Monday to wait out the explosion, which destroyed a house down the road.

Crews were working on those lines and at the pipeline site Tuesday, bringing an unusual amount of traffic to Ivy Lane, the road closest to the blast. Resident Amy Herbster said the road is usually quiet, so she has cautioned her four children to be careful playing in the area.

She evacuated Monday morning with her family and their pets — several cats and rabbits — after waking to a loud exploding noise.

“I just have this sense of lingering jumpiness,” she said Tuesday.

She says she knows pipeline incidents are rare, and she’s trying her best to reassure her kids, who are worried about another potential explosion.

“I’ve been around for 44 years,” she said she told her children. “I’ve never experienced anything like that. I likely won’t again. You guys will be fine. The gas is off right now, so there’s no gas running through it, so it’s not going to catch fire again.”