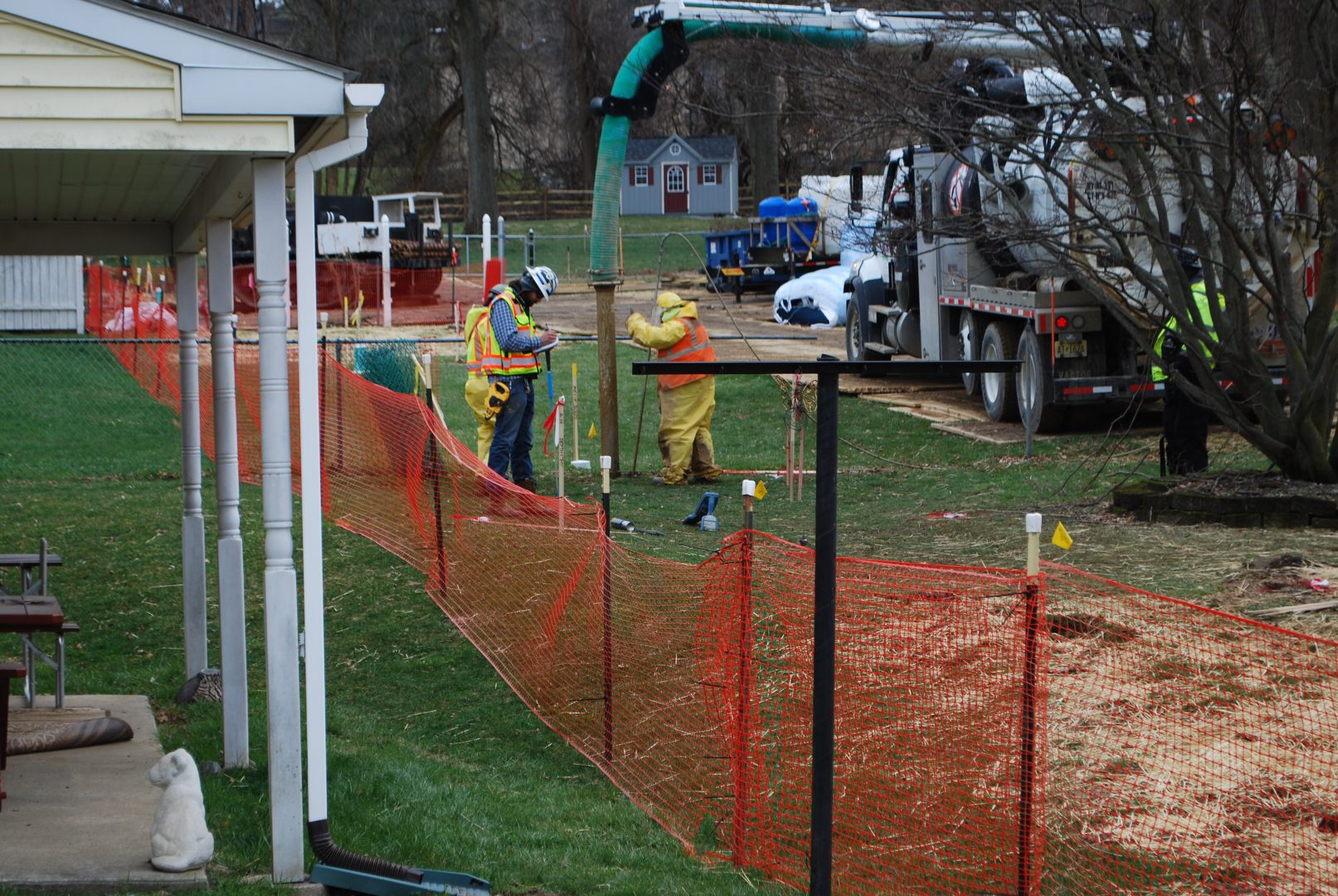 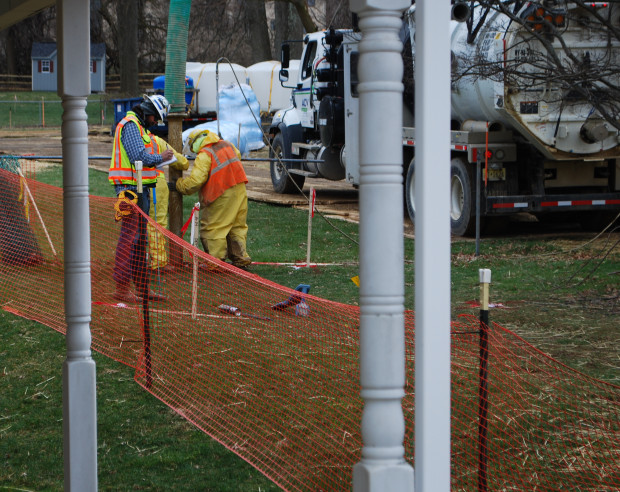 Workers and contractors for Sunoco Pipeline begin an ‘additional investigation’ of geological conditions behind homes at Lisa Drive, West Whiteland Township, Chester County where the company has been drilling for construction of the Mariner East 2 and 2X pipelines.The company says their construction equipment was vandalized.

Sunoco Pipeline offered a $10,000 reward on Thursday for information leading to the arrest of vandals who the company said attacked construction equipment along the route of the controversial Mariner East 2 pipeline in West Whiteland Township, Chester County.

The attacks on April 2 and 3 caused “significant damage” to two pieces of equipment, the company said in a statement.

Recognizing the opposition that the pipeline project has provoked in some communities, Sunoco said it accepts people’s right to protest, but only if it’s peaceful.

“We understand that there are varying opinions about critical infrastructure projects like the Mariner East 2 pipeline, and we respect the rights of all to peacefully protest, however the destruction of equipment is not peaceful,” it said in a statement.

West Whiteland Police confirmed the incident which they said affected a bulldozer and a backhoe. An investigation is active, and there are no suspects, Police Chief Joseph Catov said Friday morning. “There’s no indication as to who did it or why it was done,” he said.

Catov said the vandals cut hydraulic and fuel lines and some wiring, tried to seal the cab of one vehicle using silicone, and may have poured sand into a diesel tank. He said the damage is being assessed.

The attacks took place in the same township where multiple sinkholes developed along the pipeline construction route starting late last year. Sunoco workers have been digging up several back yards there to investigate the integrity of the adjoining Mariner East 1 pipeline, which was shut down by the Public Utility Commission on March 7 because of public safety concerns.

Sunoco offered to pay for the relocation of the residents of five homes along one side of Lisa Drive in the township during the four-to-six week investigations.

West Whiteland is also where Sunoco pipeline drilling punctured an aquifer last summer, causing the contamination of some private water wells, and leading the company to pay for most of the affected residents to be connected to public water.

Sunoco spokesman Lisa Dillinger said the incident was the first act of vandalism along the cross-state Mariner East 2 line, which has been under construction since February 2017, and has been plagued by many spills of drilling mud, a temporary state-ordered shutdown and a $12.6 million fine.

Dillinger said the incident did not take place at Lisa Drive. She declined to provide further details. The company is not releasing photographs of the damaged equipment because it does not want to compromise an investigation by local police, Dillinger said.

Del-Chesco United for Pipeline Safety, a coalition of Delaware and Chester County communities that oppose the Mariner East project, said it condemns any property damage, whether by vandals or by Sunoco, which the group accuses of harming the environment and residential neighborhoods.

“Del-Chesco United has no knowledge of anyone disturbing Sunoco equipment in West Whiteland Township,” the group said. “We observe that Sunoco has had a continuous and invasive presence in the area.”

It argued that Sunoco has had a history of environmental violations during the construction of the two Mariner East pipelines, prompting Pennsylvania regulators to shutter the project for a month starting in early January, and resulting in three federal enforcement actions that month.

The pipeline was scheduled to begin operation by the end of June, company officials said during a conference call in February.

This story has been updated to include a police statement, and adds Sunoco’s statement about those responsible for the vandalism.