I stumbled across a Washington Post story this morning that describes how Russia’s Internet Research Agency tried to manipulate the debate over energy-related issues in the United States via social media.

The article summarizes a report from a U.S. House committee that includes screenshots of social media posts created by the “troll farm.” I did a double-take when I scrolled past this one: 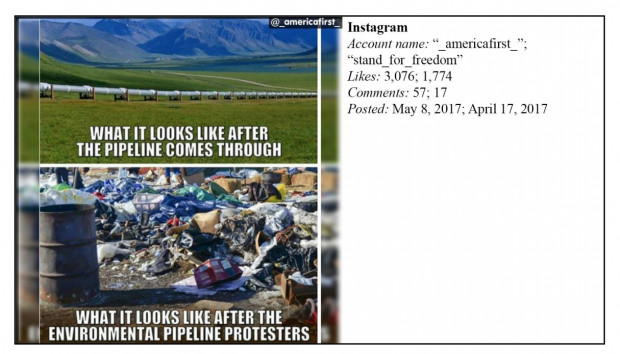 That photo on the bottom? It’s mine. I took it a year ago, before I was a reporter for StateImpact Pennsylvania. At the time, I lived in North Dakota and was covering the Dakota Access Pipeline protests. The trolls — from the same group Special Counsel Robert Mueller recently indicted for allegedly interfering in U.S. elections — obviously cropped it and reproduced it in a pixelated meme. 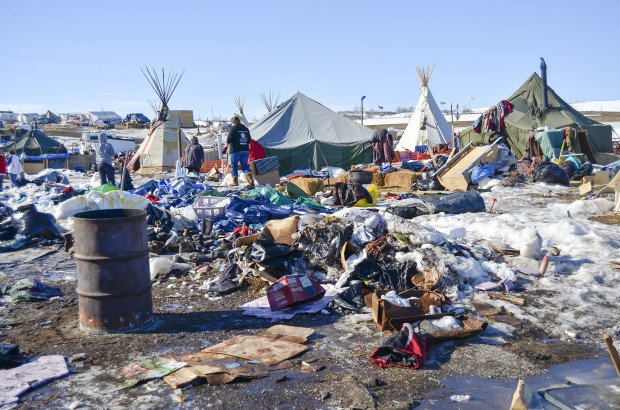 A little background: One year ago, I made one of my last trips to Oceti Sakowin, the main camp set up along the border of the Standing Rock Sioux Reservation where tribal members and environmental activists were protesting construction of the Dakota Access Pipeline. At the time, I was covering the cleanup of the protest camps for NPR, as well as Prairie Public Broadcasting (North Dakota’s NPR station) and Inside Energy (a collaboration of public media journalists reporting on energy in the West).

The cleanup was a sensitive subject. Debris from the camps was strewn all over the ground, including donated food, clothing, blankets and supplies for shelters. Hundreds of people, including protesters and residents of the reservation, were working to clear it all out because they feared nearby rivers would soon thaw and flood the area. North Dakota’s governor had already called for the camps to empty amid flooding concerns.

To some, this moment highlighted what they considered a hypocrisy among pipeline protesters. The demonstrators claimed to be fighting to protect the environment, but had left behind a lot of trash. The Russian trolls picked up on this in their meme.

But to others who supported the #NoDAPL movement, the cleanup effort showed their commitment to protecting the same waterways they worried would be harmed by a potential oil spill from the nearby pipeline. It was also a moment of reflection — and a bit of sadness for those present — as it was obvious the months-long fight on the ground at Standing Rock was coming to a close.

Fast forward to today: Never did I imagine a photo I took would be used by Russian trolls to try to manipulate the pipeline debate. But as all journalists and photographers know, controlling your images once they’re posted online is nearly impossible.

In reading through the congressional report, one point jumped out at me. Russia’s Internet Research Agency spread posts both attacking the protesters and trying to drum up sympathy for them:

…several posts encouraged protests of pipeline construction, which is illustrative of the Kremlin’s indiscriminate efforts to influence U.S. energy policy. Numerous posts, for example, directly targeted the Dakota Access Pipeline (DAPL). The posts emphasized and exacerbated the alleged violent nature of the DAPL protests. Additionally, several Russian posts focused on the counter-narrative and sought to exploit anti-activist sentiment by propagating content supportive of pipeline construction efforts, illustrating once again the Kremlin’s indiscriminate efforts to cause discord and disruption.

During the eight months I covered the pipeline protests, my social media feeds were saturated by similar memes. It got to the point where I couldn’t stand to log in to Facebook because the hostility was so high from the various pages I followed on both sides of the pipeline debate. I never wanted to contribute to that vitriol, but there’s not much you can do when Russian trolls steal your photo and make it part of their propaganda machine.