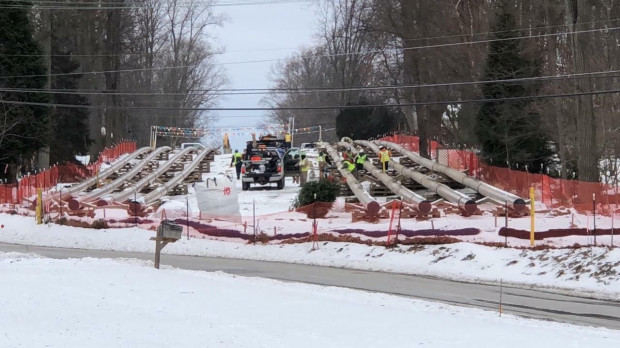 Pennsylvania’s decision on Thursday to allow Sunoco to resume construction on the Mariner East 2 pipeline after a month-long shutdown failed to convince critics that the company will do so with any more respect for environmental regulations than they say it has had since starting the project a year ago.

Despite the Department of Environmental Protection’s $12.6 million civil penalty for the project’s many violations, and the company’s agreement to do a compliance review, critics said the measures don’t ensure Sunoco will meet regulations as it tries to get the natural gas liquids pipeline up and running after a long series of delays.

“I am not satisfied that DEP and Sunoco’s agreement will be robust enough to prevent the same types of egregious environmental harm from occurring during future construction,” said Joseph Otis Minott, executive director of Clean Air Council, a Philadelphia-based environmental group that has led legal challenges to Mariner East 2.

Minott dismissed the DEP’s penalty as a “slap on the wrist” for a multinational corporation that has damaged wetlands, private property and in some cases private water wells with dozens of drilling mud spills along the 350-mile cross-state pipeline route.

He said the agreement relies on Sunoco’s promises to do better, but those have not proved fruitful in the year that Mariner East 2, currently scheduled for completion in the second quarter of 2018, has been under construction.

On Jan. 3, the DEP shut down construction related to permits it had issued, citing repeated violations. In its statement on Thursday ending the shutdown, the agency said it had taken steps since then to ensure that the remaining construction would comply with permits and with environmental law. In the agreement, Sunoco withdrew an appeal against the shutdown, filed on Feb. 2.

Sunoco spokesman Jeff Shields, asked to explain how the company would avoid future violations, cited a section of the DEP’s statement saying that additional measures have now been put in place to ensure compliance with permit conditions.

The statement said that “all permit conditions will be followed at all times moving forward, as well as additional measures and controls that Sunoco will implement to minimize inadvertent returns and water supply incidents.” Inadvertent returns are an industry term for spills of drilling fluid.

But Rich Raiders, an attorney who has represented landowners in eminent domain fights with Sunoco, said the DEP’s action does nothing to ensure that Sunoco’s long series of environmental violations won’t be repeated.

The agreement should have been made before Judge Bernard Labuskes of the Environmental Hearing Board, a state court that temporarily banned drilling along the line last summer, and who would have allowed both sides to argue in public, Raiders said.

“DEP and Sunoco just cut this deal and nothing went before Judge Labuskes so we have no clue as to if this actually means Sunoco is going to change their way of business and start behaving,” he said.

Absent a court agreement with the opportunity for public input, it’s difficult to convince a skeptical and in some cases hostile public that anything meaningful is going to change, Raiders said.

If Sunoco had apologized for its violations, fired senior staff and consultants, and explained in detail how it was going to fix its deficient practices, it might have been able to rebuild public trust, Raiders said.

But the agreement only reinforces public misgivings about both entities, he said, and DEP’s action Thursday did nothing to alleviate those doubts.

DEP spokesman Neil Shader said the department strongly disagrees with arguments that the new agreement won’t ensure better compliance. He said the deal includes a binding plan that ensures permit conditions are met and that spills will be minimized.

“DEP will be monitoring activities closely to ensure that Sunoco is meeting the terms of this agreement and its permits,” Shader said.

State Sen. Andy Dinniman (D-Chester County), an outspoken critic of the pipeline, rejected the DEP’s assurances, saying the fine won’t undo the environmental damage done by the pipeline construction so far, and accusing DEP of ignoring community calls for an assessment of safety risks that may be posed by the pipeline.

“Nothing in this agreement adequately addresses our ongoing concerns regarding the proximity of the pipeline to schools, daycare facilities, parks, libraries, and senior living communities,” Dinniman said in a statement.

Dinniman’s concerns were echoed by Del-Chesco United for Public Safety, a community group that says the pipeline represents a grave risk to public safety, especially in Delaware and Chester counties. It said the Wolf administration should have used the shutdown period to launch an independent risk assessment of the pipeline.

‘Gov. Wolf continues to pay more attention to Sunoco’s interests than he does to the safety of seniors and children of Pennsylvania,” the group said in a statement.

Other critics accused the agency of not being tough enough on the pipeline industry.

“The Department of Environmental Protection has demonstrated once again that its allegiance is with the companies it is charged with regulating, not the public it was created to serve,” said Karen Feridun of the anti-pipeline group Berks Gas Truth.

Feridun rejected McDonnell’s statement that DEP had held Sunoco to the “highest standard possible” during its application for permits and subsequent construction. She called the assertion “demonstrably untrue” given the DEP’s documented issuance of permits even though some deficiencies remained.

She said texts recently published by StateImpact showing discussions between Gov. Tom Wolf’s officials and the DEP shortly before the permits were issued revive questions about whether the DEP issued the permits because of pressure from the governor.

The Pennsylvania Energy Infrastructure Alliance, which advocates for the pipeline industry, defended the DEP’s action as a credible response to Sunoco’s permit violations.

“DEP’s action proves that regulators are being an effective watchdog to ensure safe, responsible development,” said spokesman Kurt Knaus. “With the stop-work order lifted, this project can get back on track.”

Scott Blanchard
PROJECT MANAGER
Michael Williams
Up Next
February 8, 2018 | 10:05 AM