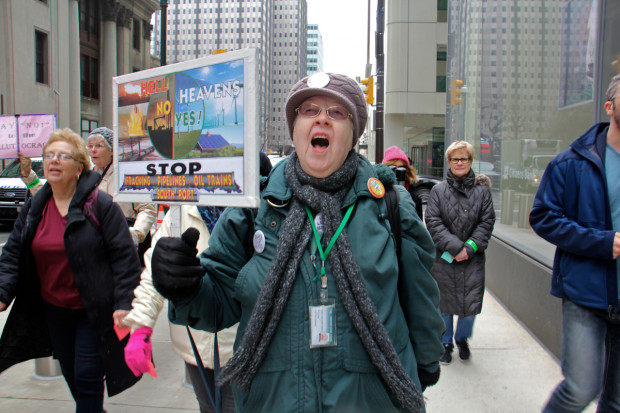 Protesters march on Arch Street in support of the EPA, Tuesday, March 21, 2017. EPA employee Gary Morton spoke at the rally. About a week later, a Freedom of Information Act request was made seeking any emails between him and Sen. Bob Casey.

With looming budget cuts threatening jobs, employees at the Environmental Protection Agency have something else to worry about. A private agency investigated employees who criticized the EPA, according to a report in the New York Times.

When EPA union official Gary Morton protested proposed budget cuts during his lunch hour last March outside EPA’s Region 3 headquarters in Center City Philadelphia, he didn’t think it would lead to a public records request regarding his emails.

“I said, wow, this is a George Orwell type state,” Morton said.

Ten days after that rally, an attorney working with America Rising, a Republican opposition research group that specializes in digging up dirt on rival candidates, used the Freedom of Information Act to seek emails between Morton and Democratic Senator Bob Casey. The Times reports that the EPA has since hired an affiliated group of America Rising to monitor press coverage for the agency.

For Morton, who is president of AFGE local 3631, the FOIA requests were a fishing expedition that turned up nothing. AFGE 3631 represents EPA employees in the Philadelphia region. Morton works to enforce federal regulations on underground storage tanks. Like all federal workers, he is forbidden by the Hatch Act from doing any kind of political work on government computers or government time.

“So this was an attempt to find out if I had violated that act so I could be brought up on charges,” Morton told StateImpact. “It was retaliation for my political activities.”

Morton worries the actions could intimidate other federal employees from engaging in political activity.

“I was not on government time rallying against budget cuts that would not only put EPA employees out of work, but have a detrimental effect on the citizens’ clean air and clean water,” he said.

The attorney who filed the FOIA request, Allan Blutstein, is also senior vice president for Definers Public Affairs, the company hired by EPA as a clip service. Requests for comment were not returned.

Morton says changes at the agency also worry him. He says a recent memo from EPA headquarters in Washington, D.C. would make it more difficult to enforce rules regarding underground storage tanks.

Morton’s colleague Jan Nation is the union shop steward in Philadelphia and works as a paralegal. Nation has worked for EPA for 30 years. She says she’s never seen this level of scrutiny of EPA employees.

“We’re all kind of looking over our shoulders here and wondering what rights are being taken away from us and if we exercise our rights will there be negative consequences,” Nation said.

Last week, she said, she got a memo that EPA has dissolved the labor management forum, which she said was instituted under President Obama and helped deal with issues at regional offices before they became problems. The new administration gave a deadline for getting rid of the forum — December 22, 2017.

“So many things are happening so quickly, and there’s not really a lot of transparency with many of them,” Nation said.

DEP says iPads, plus a new app, mean staff can do more oil and gas inspections