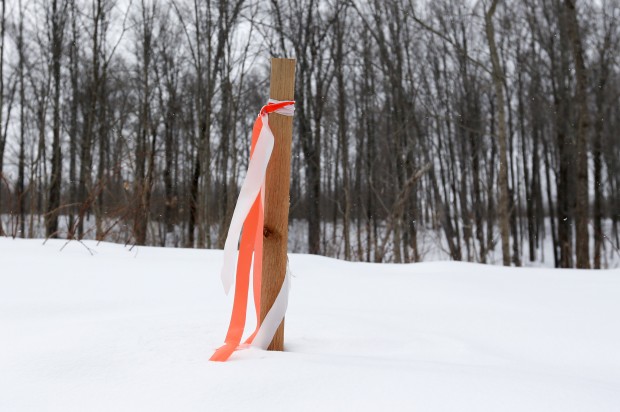 FILE: In this Feb. 2015 photo, a ribbon tied to a stake on Kernan family property marks the proposed path of the Constitution Pipeline in Harpersfield, N.Y.

A federal appeals court ruled against the Constitution Pipeline Friday, in a challenge it brought against New York State’s denial of a water quality permit.

The decision is a major blow to the embattled project, which was planned to run 121 miles, carrying natural gas from the Marcellus Shale in northeastern Pennsylvania through New York State.

Last May the Constitution Pipeline sued to overturn the permit denial from New York’s Department of Environmental Conservation, which halted the federally-approved project.

U.S. Court of Appeals for the Second Circuit sided with the state, saying it acted within its authority to deny the permits.

The project also attracted criticism in Pennsylvania, particularly after the company began clearing trees on private land, while under protection of armed federal marshals. Lynda Farrell of the Chester County-based Pipeline Safety Coalition says the pipeline industry had grown accustomed to assuming a project would move forward after it gets federal approval.

“That’s what the status quo has been. Pipelines had never been a big topic of conversation before. The Marcellus Shale has raised public awareness around whether the regulations in place are conducive to today’s society,” she says. “The public is learning more and more that change is possible. These regulations and processes are not written in stone.”

The New York DEC did not intermediately respond to requests seeking comment Friday.

In an email, Williams spokesman Keith Isbell signaled the company’s next move may be to bring the matter before the Federal Energy Regulatory Commission (FERC).

“In today’s decision, the Second Circuit recognized the jurisdiction of the D.C. Circuit, and the D.C. Circuit has recently acknowledged FERC’s authority to make the ultimate decision under the Natural Gas Act,” Isbell writes. “While we would have preferred an immediate path to construction, we are pleased with the court’s resolution of this jurisdictional issue.”

Note: This story has been updated with reaction to the decision