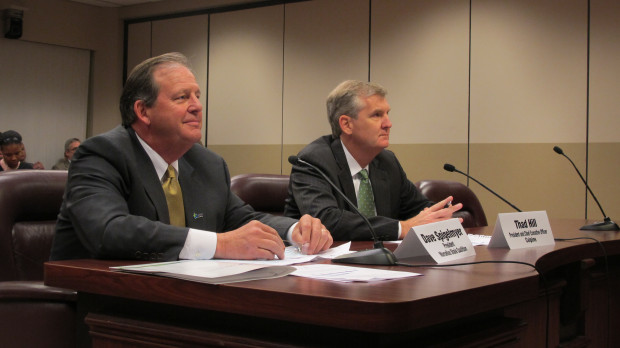 Two starkly different versions of reality were on display Wednesday morning at the state Capitol in Harrisburg.

Inside the building, a joint hearing by Republicans from the Senate Majority Policy Committee and Environmental Resources and Energy Committee examined the economic benefits natural gas production has brought Pennsylvania– with skyrocketing production, tens of thousands of new jobs, and more than a billion dollars in impact fee revenue. Outside, environmental groups and concerned citizens railed against the industry’s harmful air emissions, which exacerbate global climate change and can contribute to localized health effects.

At the Senate hearing, David Spigelmyer, president of the gas trade group, the Marcellus Shale Coalition, described the game-changing role the gas industry has played in Pennsylvania– noting the state has surged to become the number two producer of gas in the nation, after Texas, and attracted $10 billion in investment toward new or converted natural gas power plants.

“We are at a povitol moment in Pennsylvania,” says Spigelmyer, “We have an unprecedented opportunity to leverage our indigenous resources to create a manufacturing resurgence and that could drive our economy, provide job opportunities, and establish a stable tax base for generations.”

Thad Hill of Calpine Corporation– the nation’s largest generator of electricity from natural gas and geothermal resources– told lawmakers that competitive electric market policies are working, noting the shift away from the dominance by coal, toward more natural gas.

“My key message today is that the market-driven competitive electric sector here in Pennsylvania is on a path to transition,” says Hill. “From one supported by older, less efficient and more costly power plants to one supported by newer, more efficient, less expensive and cleaner natural gas plants.” 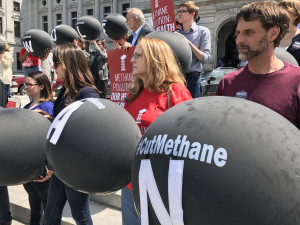 After the hearing, about 40 people gathered on the Capitol steps, holding up large black balloons to symbolize the methane pollution created by the oil and gas industry. Nadia Steinzor, of the environmental group Earthworks, said she was disappointed the Senate hearing only focused on the benefits of the gas boom.

“I think it’s a real shame they only hear from one side, and not from the folks who are actually living the in gas fields,” she says.

Methane is the main component of natural gas, and it can leak throughout the entire process of development. According to the EPA, natural gas and petroleum systems are the largest source of methane emissions in the U.S. Compared to carbon dioxide on a 100-year timescale, methane is over 25 times more potent as a climate-damaging, greenhouse gas.

That’s why earlier last year Governor Tom Wolf announced the state Department of Environmental Protection would create new regulations to combat methane leaks from the state’s gas industry. DEP is still in the process of doing that, but there have been efforts by some legislators to curtail it. Steinzor says the groups’ main message to lawmakers is to stay out of the way.

“We’re asking the legislators to not keep trying to find ways to block DEP’s authority and Governor Wolf’s methane plan,” she says. “The plan is great for the state, in terms of jobs, public health, and climate change.”