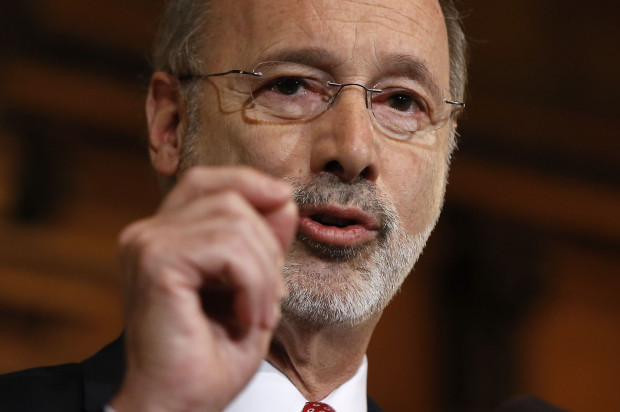 This Dec. 29, 2015, file photo shows Pennsylvania Gov. Tom Wolf speaking with members of the media at the state Capitol in Harrisburg, Pa. Governor Wolf says he plans to propose a natural gas severance tax at the end of this month. It would be his third attempt to tax the gas industry since becoming governor. File

After failing to pass a natural gas severance tax for the last two years, Governor Tom Wolf is hoping this year, the legislature will get on board with his proposal.

Following an event at the Academy of Natural Sciences in Philadelphia Tuesday evening, Wolf said he plans to ask for a tax on Marcellus Shale drillers during his 2017/2018 fiscal year budget address next month. However, he was mum on the details, which he said are still being worked out with legislators and the natural gas industry.

Wolf, who campaigned on imposing a five percent severance tax, thinks the measure is key to making sure communities hours away from the nearest gas well buy in to Marcellus Shale development, especially as pipeline companies look to move natural gas to markets on the East Coast through their backyards. Increasingly, suburban Philadelphia communities in Delaware and Chester Counties, which lie along the eastern edge of route of the proposed Mariner East pipeline, have been organizing to resist the project.

“I want to be able to say to the people in Delaware County, if you support reasonable and environmentally correct expansion of the gas industry, this is going to help your schools,” the governor said.

Last year, Wolf failed to pass a 6.5 percent severance tax at a time when natural gas production and prices were tanking.

The governor would not say how high a tax rate he’s proposing this year, but hinted at a new plan that would be sensitive to the natural gas market where prices remain low.

“It could be something that has some triggers in depending on the price of natural gas,” he said. “It’s not a matter of whether it’s going to be more or less” than previous proposals.

However, it is unclear whether that would sway Republican lawmakers hesitant to raise taxes or gas industry lobbyists, who have beaten back all previous attempts at a severance tax in the state.

In the meantime, Pennsylvania remains the only major energy-producing state not to levy a tax on extraction. Instead, drillers pay an impact fee for every well drilled. So far, these fees have brought in about $200 million a year, with most of the money going back to the counties and municipalities with the most wells.