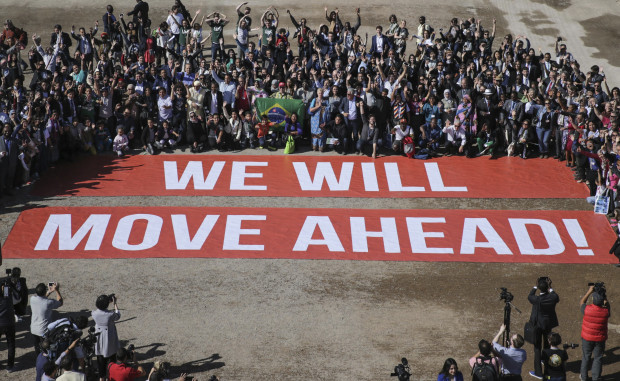 Participants at the COP22 climate conference stage a public show of support for climate negotiations and Paris agreement, on the last day of the conference, in Marrakech, Morocco, Friday, Nov. 18, 2016.

A gathering of about 200 nations working to combat climate change wrapped up on Friday in Morocco with a call to U.S. president-elect Donald Trump to join the fight against global warming. Trump’s election shocked delegates and activists assembled in Marrakech for two weeks of talks. Trump has said he would pull the U.S. out of the international climate treaty negotiated in Paris last year.
The election raises questions about the staying power of the Paris Agreement, hammered out at last year’s conference. After decades of failure, the climate accord negotiated last year and ratified earlier this month, was seen as an historic achievement. Finally, the nations of the world had come together to help lessen the growing impacts of climate change – melting glaciers, rising seas, drought, and devastating storms.
With the role of the federal government in doubt, some see American cities and states serving as a place-holder for U.S. participation.

Marrakech was billed as the climate conference of action. But the election of Donald Trump turned the rock-star U-S climate delegation into lame ducks.
The U.S. is a major player at these talks. It’s the second largest carbon emitter in the world. And it’s also one of the wealthiest. Obama had made tackling climate change a top priority for his diplomatic corps. He pledged $3 billion to the Green Climate Fund last year to help poor countries adapt to climate change.
But no one in Marrakech would admit this landmark achievement could fall apart with a U.S. exit.
Instead, they’re now looking to American cities, like New York, Los Angeles, and Philadelphia, and to American states like California, to carry the climate torch if Trump acts on his promise to pull out.
Out-going U.N. Secretary-general Ban Ki-moon answered questions about Trump by saying the momentum behind the agreement was unstoppable. He also pointed to American companies invested in renewables, and local governments committed to cutting emissions.
“These American companies, and largest local governments, they have understood the severity of the climate change phenomenon,” he said. “They are moving forward because consumers are demanding it, people are demanding it. They know that this going toward low carbon economy, that’s the answer for their business future.”
California, a leader in emissions reductions and climate change planning in the U.S. sent five people to the Marrakech talks.
Ken Alex is senior policy advisor to California Governor Jerry Brown. Alex said in the wake of the Trump election, the state’s status at the climate talks has risen.
“People are so pleased that California is here and reaffirming our interest and our participation,” he said. “We have many agreements with China, with Mexico and we will continue to work with anyone who is interested in working with California. It’s good for the economy, it’s good for trade, it’s good for California’s environment.” 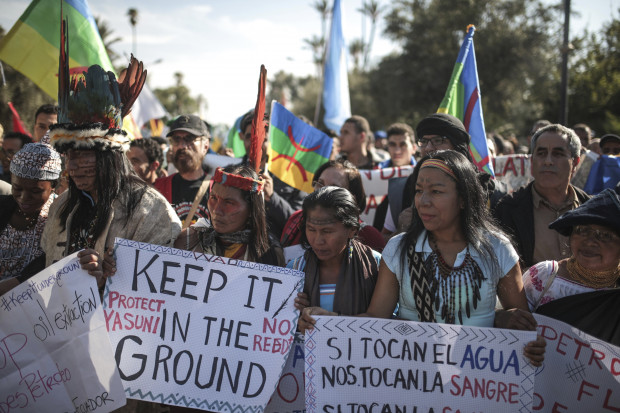 Some are hoping that if the Trump makes true on his promises by withdrawing, but large  states like California forge ahead, the U.S. could at least meet some of its emissions reductions targets pledged in Paris.
Robert Stavins is a professor at Harvard’s Kennedy School and Director of the Harvard Project on Climate Agreements. Stavins says California, Washington, Oregon and the Northeast states could not make up for an overall federal policy, but could at least keep the Paris Agreement alive.
“Those jurisdictions rather than falling back because of what happened in the election, they’re actually going to become more aggressive [with their climate goals],” he said. “If their actions could be recognized within the structure of the Paris climate agreement, that’s going to be more than a placeholder for the United States. That could prevent that unraveling that is such a risk.”
Teresa Ribera, executive director of the Institute for Sustainable Development and International Relations, an independent climate change think tank in Paris. Ribera also served as Spain’s former negotiator at previous climate talks. She says the beauty of the Paris Agreement is its flexibility, and potential to recognize the contributions of local governments from the U.S.
“So formally they will not be a signatory part of the agreement but they will find places to cooperate and be part of the solutions that are going to be built,” she said.
Ribera says it’s not the ideal solution. But if Trump pulls out, and does not honor the financial commitments to poor countries, it may be the only solution.
Susan Phillips reported from Morocco on a fellowship from the International Reporting Project (IRP).