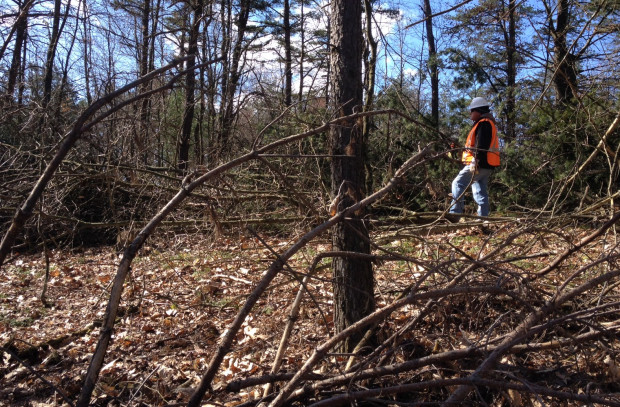 A tree clearing crew member on property in Huntingdon County where Sunoco was permitted to cut trees along the pipeline path before obtaining water crossing or earth moving permits from DEP.

Pennsylvania’s Department of Environmental Protection has rejected Sunoco Logistics current proposal to protect waterways and wetlands at risk of damage by construction of the company’s Mariner East 2 pipeline. Sunoco recently submitted what DEP refers to as “technically complete” permit applications necessary for moving forward with the pipeline project. DEP’s critiques of the permit applications come after a year of working with agency staff to resolve problems with the company’s initial proposals. And yet, more than a year since Sunoco first applied for the permits, DEP has documented hundreds of issues remaining in each of the 17 counties along the pipeline route. DEP’s response documents, known as “deficiency letters,” detail missing or insufficient information about how the company plans to protect the environment, drinking water sources, and cultural heritage sites along the 350-mile long route from Ohio to Marcus Hook, Delaware County.
The $2.5 billion Mariner East 2 project would take propane, butane and potentially ethane though 17 counties from the Marcellus Shale of eastern Ohio and southwestern Pennsylvania to a terminal at Marcus Hook near Philadelphia, where the fuel will be shipped overseas.
Pipeline construction on the 20-inch diameter high pressure line will tunnel beneath 17 counties in the commonwealth, cut through 2,700 properties, require a 50 foot right-of-way, and cross more than 1,200 streams or wetlands. The project, which has already begun tree clearing in parts of the state, requires state approved plans to prevent erosion and sedimentation, as well as mitigate harm to waterways, before any pipe is put into the ground. Chapter 105 permits, a necessary step for any construction project that may impact a waterway, are aimed at protecting streams and wetlands. Chapter 102 permits focus on erosion and sedimentation.
No federal agencies oversee the pipeline’s construction. So these obscure permits are the only chance for the public, or state regulators, to have any input on how this massive pipeline project will be built.
The Chapter 105 deficiency letters sent to Sunoco and posted on DEP’s website September 6, outline an incredibly long list of problems with the company’s proposals including: a lack of construction details for water crossings, no analyses for how water quality standards for each crossing will be maintained or how the area will be restored after construction, no mention of nearby drinking water wells and contact information for those responsible for them, no project wide cumulative impacts analysis, no secondary impact analysis, no explanation of how threatened or endangered species will be protected, no evidence of consultation with or approval from the Pennsylvania Historical and Museum Commission for protecting cultural heritage sites, and no emergency plans in the case of a pipeline rupture.
Some of the deficiencies listed by DEP are bizarre, or just plain sloppy. In the 21-page deficiency letter for Delaware County, signed by DEP’s chief of dams and waterways John Hohenstein, the agency questions why the permit application indicated construction of an 8-inch pipeline, and why in one section Sunoco states that a second pipeline will be built within the next 5 years.
According to an information sheet on Sunoco’s own website, the Mariner East 2 project comprises a 20-inch diameter line, and possibly another 16-inch line, both of which were scheduled to be completed and shipping gas by the first half of 2017.
In the 37-page deficiency letter outlining the problems with the Chapter 105 permits in Huntingdon County written by DEP’s civil engineer manager Edward Munzie, DEP questions how one section of the application describes Sunoco’s potential second Mariner East 2 pipeline as 16-inches in diameter, and another part of the application states it could be up to 20 inches. Munzie asks: “Which is correct?”
The letters also question the credentials and authority of the Sunoco representative who signed off on the proposals, Matthew Gordon, and point to different titles he uses in different parts of the permit applications. The applications require an engineer’s seal and certification.
Sunoco has to respond to the deficiencies by November 7 or risk rejection of the permits. The company could also ask for an extension.
Environmentalists and pipeline safety advocates say the extensive deficiency letters show the company has not taken environmental protection or safety seriously.
“It’s a giant incomplete series of applications,” said Alex Bomstein, an attorney with the Clean Air Council, which has also filed a lawsuit challenging the authority of the pipeline company to take land through eminent domain. “The level of these deficiencies surprised even me.” Bomstein stressed that Sunoco is not unique, in that  he’s seen other large projects where companies have submitted incomplete permit applications. 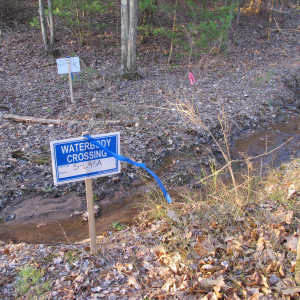 A sign marks a water crossing where the Sunoco Mariner East 2 pipeline would cross in Huntingdon County.

The Clean Air Council coordinated with several groups to submit public comments on the applications to DEP.  Lynda Farrell, with the Pipeline Safety Coalition, an organization that also submitted public comments, praised the agency for their work outlining the deficiencies of the permit applications. But she questions why the public had a limited comment period, while companies like Sunoco get to revise their applications until they get the approval to start construction.
“At what point do you say no?” asked Farrell. “This company shouldn’t be permitted to drive a tricycle across the state let alone a major pipeline.”
But Sunoco says it’s normal to have unresolved issues for such a large project. Sunoco spokesman Jeff Shields says the deficiency letters were not unexpected.
“The majority of the comments from the [DEP] are duplicates between the letters,” wrote Shields in an email. “Some questions not answered in one section of the application are answered in other sections.  We are working with the Department to finalize the information and clarification they are requesting, and we will be providing that to them.”
Patrick McDonnell, acting head of DEP told StateImpact there is usually a back and forth on most projects when it comes to environmental permit applications. What’s different about the Mariner East 2, he said, is the size and scope of the project.
“For these larger, multi-county [projects], you are not just dealing with one wetland issue or one stream-crossing issue, you are dealing with multiple issues across multiple jurisdictions,” McDonnell said. “Part of what you are seeing in this is it’s just an unusual project. Typically, we are dealing with much more discrete projects geographically. Having something that stretches across the entirety of the state is not something that we are typically dealing with.”
Jon Hurdle contributed reporting to this article.