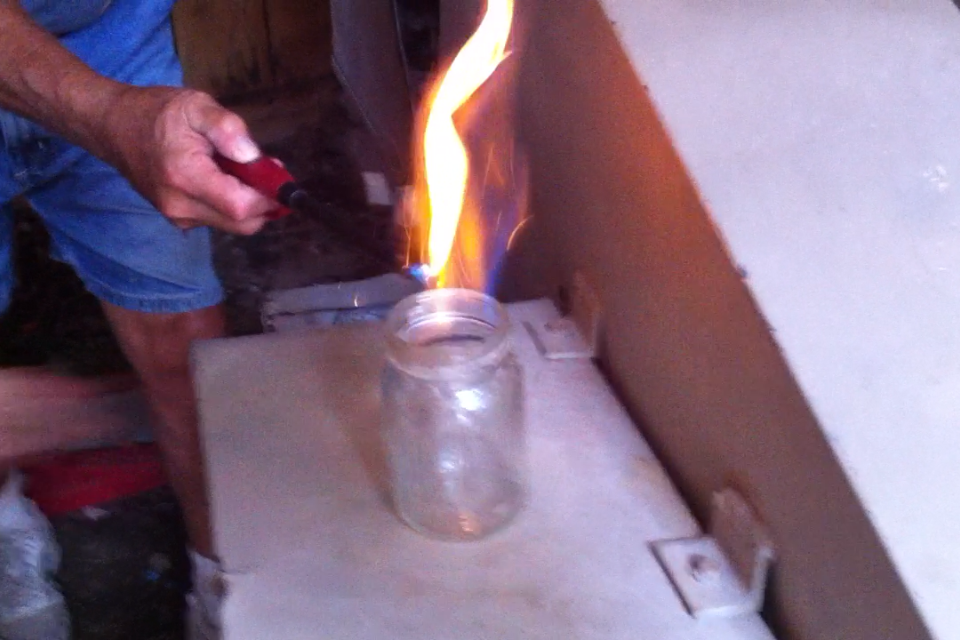 Last September, Chesapeake Energy CEO Aubrey McClendon declared to a Philadelphia energy conference that the problem of methane migrating through the ground near natural gas drilling sites had been fixed.  “Problem identified. Problem solved,” he told an industry-heavy crowd at the Philadelphia Convention Center.
Nearly a year later,  Bradford County resident Michael Leighton is worried about the flammable gas seeping into his woods.
Leighton lives about a half-mile from a Chesapeake Energy well that Pennsylvania’s Department of Environmental Protection suspects leaked methane gas through holes in its casing. For more than two months, gas has been gurgling into creeks and wetlands on Leighton’s property. That’s in addition to the methane in Leighton’s water well, and the methane in his basement.
“It bothers me because this is a big investment for us,” said Leighton, who moved with his wife to Leroy Township from Chester County two years ago. “This is our retirement home. I built this house, built the barn.” Now, he’s worried about drinking his own water. “They say it’s safe to drink, but I hesitate.”
Chesapeake isn’t the only energy company the Department of Environmental Protection is investigating for ongoing methane migration problems. 13 miles west of Leroy, in Union Township, Tioga County, Shell is trying to stop a month-old suspected methane leak by flaring off natural gas and plugging an abandoned gas well discovered near its drilling site.


Flammable Gas Bubbles To The Surface

Michael Leighton’s problems began May 19. That’s when a neighbor called and asked if there was anything unusual about his water. “He said his [well] was bubbling over,” Leighton told StateImpact Pennsylvania. “I went down and looked at my well, and it was bubbling up.”
“I have 80 to 100 feet of headspace between my water and the top of my well,” Leighton said. “And the water actually boiled to the top.” The well, which supplies his drinking water, is located about 10 feet from Leighton’s house. He surveyed the rest of his property, and found nearly 20 miniature geysers squirting water and gas several inches into the air.
Soon, Department of Environmental Protection and Chesapeake Energy inspectors were on the scene. “My basement had very high levels of methane,” Leighton recalled. “At one point they gave us an evacuation notice.” Leighton and his wife Nancy refused to leave, though, so the fire department installed ventilation fans in the  basement, and cut holes in his wall to pipe fresh air in.
Two months later, a ventilation pipe and filtration system installed by Chesapeake is removing the gas from the Leightons’ water. But flammable methane is still gurgling into the streams and wetlands on their property.
How does Michael Leighton know the methane is flammable? During an interview with StateImpact Pennsylvania, he watched as a neighboring property owner held a mason jar over a bubbling puddle, took the sample inside his shed, held a lighter over the jar, and unscrewed the lid. The gas caught fire, producing a brief, blue flame.
You can watch the video below:

Leighton has owned his Bradford County property for 10 years, and said he never saw any bubbling until May 19. What happened? The Leightons live about a half-mile from Chesapeake Energy’s Morse well pad. In a letter, Department of Environmental Protection Secretary Michael Krancer spelled out state regulators’ initial findings: They think natural gas escaped — migrated — through perforations in the Morse well’s casing during a bungled repair job. (Read the letter at the bottom of this article.)
The Department hasn’t reached any final conclusions yet, but this wouldn’t be the first time Chesapeake drilling has created problems in Bradford County. In April 2011, a Chesapeake well suffered a blowout, and spilled more than 10,000 gallons of hydraulic fracturing fluid into a Leroy Township field. Some of the fluid made its way into a nearby creek, and state regulators eventually slapped Chesapeake with a $190,000 fine.
One month later, Chesapeake Energy was hit with a $900,000 fine — the largest environmental fine in Pennsylvania history — for failing to fix faulty well casing that caused methane gas to seep through the ground and into 16 Bradford County families’ water supplies.
In fact, the very well pad that state regulators think contaminated the Leightons’ water supply was cited for “improper well casing” in August 2010.  (Check out the well and violation information with StateImpact Pennsylvania’s interactive Shale Play app.)
The Morse pad’s damage isn’t limited to Leighton’s property, either. On June 8, the Clean Air Council, an environmental group, documented what it characterized as a “plume” of methane gas hanging over portions of Leroy Township. According to the group’s report, “The size and rate of expansion of the plume suggested large amounts of methane were being emitted into the atmosphere.”

A Geyser In Tioga County

For the people who live near Shell’s Cochran well pad in Union Township, Tioga County, the problems started in a similar fashion: a phone call about an overflowing well.
It was Thursday, June 14, and a water well located inside the Ralston Hunting Club’s cabin was flooding the building. Since Shell was drilling at three nearby locations, someone went to look for one of the company’s technicians. Shell quickly notified the Department of Environmental Protection, and moved club members away from the cabin.
Soon, someone discovered a bigger problem: a geyser shooting methane-infused water more than 30 feet in the air. “That’s when all hell broke lose,” said a neighboring landowner — who, like others StateImpact Pennsylvania talked to about the Union Township problems, requested anonymity, due to ongoing negotiations with Shell over damages and leasing.
A video shot five days after the methane problems began shows the geyser spewing water and gas:

Shell and the Department of Environmental Protection issued an evacuation request for the hunting club and the surrounding one-mile radius, which, due to Union Township’s rural nature, only affected a handful of people.
Shell immediately began flaring off gas at three nearby well pads, in order to reduce underground methane pressure. A week later, the geyser disappeared and the hunting club’s water well was no longer flooding.  But more than a month after the migration problems first surfaced, gas is still bubbling in a nearby creek, and hunting club members are still barred from their club’s cabin.
Shell suspects an old, abandoned gas well on the club’s property is responsible for the migration problems, and is constructing a new well pad next to the 80-year-old hole in order to plug and seal the well.
The abandoned well, thought to have been drilled in the 1930s, provided an elevator of sorts, bringing methane gas unearthed by Shell’s present-day drilling up toward the surface. The loosened methane dispersed into the creek, the water well and other locations through cracks in the ground. In the case of the roadside geyser, it shot through a spot where someone had, for some unknown reason, inserted a deep PVC pipe into the ground.
“Natural gas wants to migrate up,” explained Dave Yoxtheimer, a geologist who works at Penn State University’s Marcellus Center for Outreach and Research. “It’s lighter, it’s less dense. And it finds itself getting trapped in these shallower, more porous formations. And during the drilling process you can go down through these shallower formations. As you’re drilling through, suddenly you’ve created a conduit for those gasses to escape.
If a driller doesn’t surround a gas well with the proper steel and cement casing, the gas can escape, and migrate up to the surface through faults and water wells. “What you’ve done,” Yoxtheimer explained, is “catalyzed the process of natural gas drifting up over geologic time.”

“It Ain’t Worth Dirt”

It’s not clear when either methane migration problem will subside. A Department of Environmental Protection spokesman said Shell’s efforts to plug the abandoned well “could take some time.”
In a letter to the Clean Air Council about its Bradford County air quality study, Department of Environmental Protection Secretary Michael Krancer said the Chesapeake-related situation “is for the most part over.” (Read the letter at the bottom of this article.) But StateImpact Pennsylvania documented the migration on Michael Leighton’s property — as well as consistent bubbling in nearby Towanda Creek — four days after Krancer sent this letter. Leighton, who’s still dealing with regular methane inspections, clunky machines in his basement, and flammable gas on his property, doesn’t feel like the situation is “for the most part over.”
“The newspapers keep minimizing the damage here, but it’s here,” Leighton said, while pointing out the bubbling methane in the woods near his house. “And people think we’re radicals, but we’re not. We’re just upset about the condition of our property, and we want things fixed. I want my real estate back to where it was before. And right now, it ain’t worth dirt.”