Mike Krancer And The EPA: It's Complicated 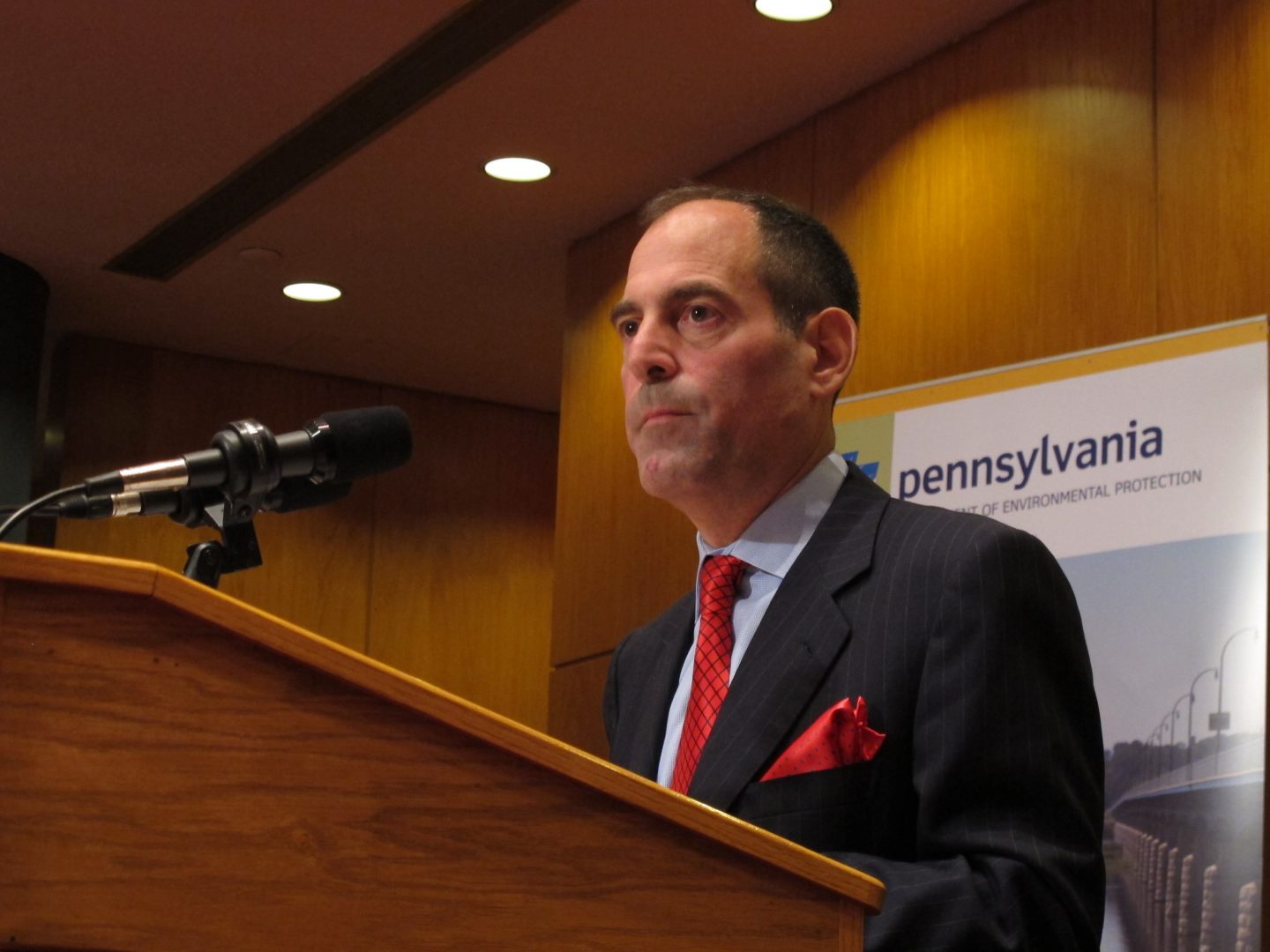 Over the last few years, the Environmental Protection Agency has taken an increased interest in regulating and monitoring hydraulic fracturing. And when the EPA steps into an area that Pennsylvania’s state agency is already overseeing, Department of Environmental Protection Secretary Michael Krancer appears to take it personally. That personal reaction often comes in the form of a blistering letter written to the EPA.
When the EPA began an investigation of whether or not the water in Dimock, Susquehanna County was safe to drink, Krancer essentially told EPA Administrator Lisa Jackson she didn’t know what she was talking about.
“We realize and recognize that EPA is very new to all of this and the EPA’s understanding of the facts and science behind this activity is rudimentary,” he wrote. “Fortunately, Pennsylvania is not new to all of this and we have a long history of experience at overseeing and regulating oil and natural gas extraction activities in our state, including hydraulic fracturing.”


The letter questioned the EPA’s motives, calling the agency’s investigation of possible fracking-related pollution in Pavillion, Wyoming a “rush to conclusions.”
The tension goes beyond natural gas drilling. In 2010, EPA began reviewing the permits the state issues for water-related coal mining operations. The federal agency was essentially looking over Pennsylvania’s shoulder as it set coal extraction guidelines. In a letter to regional EPA Administrator Shawn Garvin, Krancer expressed his “dismay,” called the new practice “disconcerting,” “unnecessary” and “overreaching,” writing, “this elevated scrutiny by EPA has little or no environmental or scientific basis and is contrary to almost three decades of past relationship between EPA and DEP.
Krancer also criticized EPA regulations aimed at improving Chesapeake Bay water quality, warning the new standards would cost Pennsylvania municipalities $5.3 billion. “This extraordinary cost is simply not reasonable, not cost effective and not likely to result in significant needed environmental gains,” he wrote.
Krancer has penned 12 formal letters to the EPA since he took charge of Pennsylvania’s Department of Environmental Protection in January 2011. StateImpact Pennsylvania obtained the documents through a Right-To-Know request. And while not all of the missives are inflammatory – Krancer is quick to point out that state and federal environmental regulators work closely with each other on a range of issues – the letters demonstrate how Krancer often views the EPA with suspicion.
Update: Read excerpts from the letters here.

Sitting in his Harrisburg office, Krancer said the EPA doesn’t always trust the state’s judgment.  “It’s amazing to me sometimes how stupid the EPA has discovered we became as of January 19, 2011,” he said, pointing to the date the Republican Corbett Administration took control. “And I continue to say that. It is somewhat frustrating because I do have 2,600 of the best experts on the planet…and I think sometimes my federal partners don’t recognize that.” Tension between the EPA and a state isn’t exactly new. During an interview with StateImpact Pennsylvania, Krancer made that point by reading from a 1997 speech given by then-Texas Natural Resources Conservation Commission Chair Barry McBee. “We feel like we’re being treated like children,” Krancer said, quoting the speech, “and I believe the EPA sees us in light of paternalistic parent-child relationship.”
Administrator Lisa Jackson even tussled with the agency when she ran New Jersey’s Department of Environmental Protection. She once called it the “Emissions Permissions Agency,” when she was frustrated the Bush Administration wasn’t doing more to crack down on air pollution.
After Krancer sent his blistering Dimock letter, Jackson was quick to point out the EPA views Pennsylvania as a partner, not a subsidiary. “I used to run a state organization and frankly would prefer not to have the federal government looking into situations,” she said. “We know we don’t know everything. We’re calling on them to help us understand it and work to collaborate. …We certainly see them as a partner.”
Krancer’s argument against more federal involvement is two-fold: he says Pennsylvania is doing a good job on its own, thank you very much; and that states have long been designated the lead regulator, when it comes to drilling permitting. Krancer points out Pennsylvania has strengthened its well-casing standards and limited the amount of drilling fluid returning to rivers and streams. Critics argue these new regulations were implemented after drilling ramped up, and worry the DEP is too reactive in drafting and enforcing new requirements.
Krancer – a Civil War reenactor who sprinkles his arguments with historical references – says he doesn’t want the federal government to overstep its role. “It’s a complicated relationship,” he told StateImpact Pennsylvania. “And the relationship between the federal and state governments in the United States has been a complicated relationship ever since 1787, when the constitution was signed. Heck, one time we had a Civil War about the federal and state relationship.”
And while Krancer dresses as a Union soldier when he reenacts the Civil War, he’s a firm supporter of states’ rights. He ran for state Supreme Court in 2007 as a strict constructionist, telling voters that Antonin Scalia was his judicial role model.
That’s not to say he’s against all federal involvement in drilling regulation.
Last month, the EPA announced new regulations aimed at cutting back the amount of methane and pollutants drillers are emitting. The agency claims the requirements will cut methane emissions by 1.7 million tons a year, when the rules go into effect in 2015.
You’d think this new federal guideline would rankle Krancer, but you’d be wrong.  “Well actually, I think they can have a positive impact. I really do,” he said.
Krancer insisted he’s OK with the new regulations, because the EPA has always had the power to regulate air quality. That’s different than drilling permits, which have long been state-controlled.
And for a letter-of-the-law guy like Krancer, the distinction makes a difference. He generated headlines in November, when, during testimony in front of a Congressional hearing, he called the question of whether or not the federal government should set baseline requirements for hydraulic fracturing and drilling waste disposal “a red herring.”
“What’s wrong with a minimum national standard?” New York Democrat Timothy Bishop asked. “Because not every state [hosts wells],” Krancer replied. “Because not every state does it the same way, number two. Number three, has the same geography. …Shall I go on?”
“Hydraulic fracturing has never been regulated by the federal government,” he wrote in his prepared statement to the committee. “It has always been a matter of state regulation.”

“EPA Has A Much Deeper Bench”

Kathleen McGinty has been on both sides of the state-federal relationship. She ran the DEP for six years when Democrat Ed Rendell was governor, and headed the White House Office on Environmental Policy during the Clinton Administration. McGinty acknowledged dealing with some “creative tension” during her tenure in Harrisburg, but insists there’s room for both the state and federal government to regulate drilling and other environmental issues.
“EPA has a much deeper bench than any state does, in terms of human health and science,” she said. “And then what the states have is, one, a much better sense of how to put an implementation strategy together that makes sense in their backyard. And second, they’re close to the ground.”
Krancer does make a point to highlight productive areas of the DEP-EPA relationship. “We’re working together, by the way, with EPA on a number of very beneficial mining projects, which are treating a lot of acid mine drainage that hadn’t been treated before,” adding acid mine drainage is one of many “creative projects” the two organizations are working together on.
And while he blasted the EPA for conducting its own review of the mining permits Pennsylvania issues – this was the letter where Krancer called the agency’s action “disconcerting” and “overreaching” – Krancer sent the EPA a cordial follow-up letter after a meeting on the issue. “We look forward to continue working with you to issue permits that protect the health and welfare of our citizens and the environment,” he wrote in January 2012.