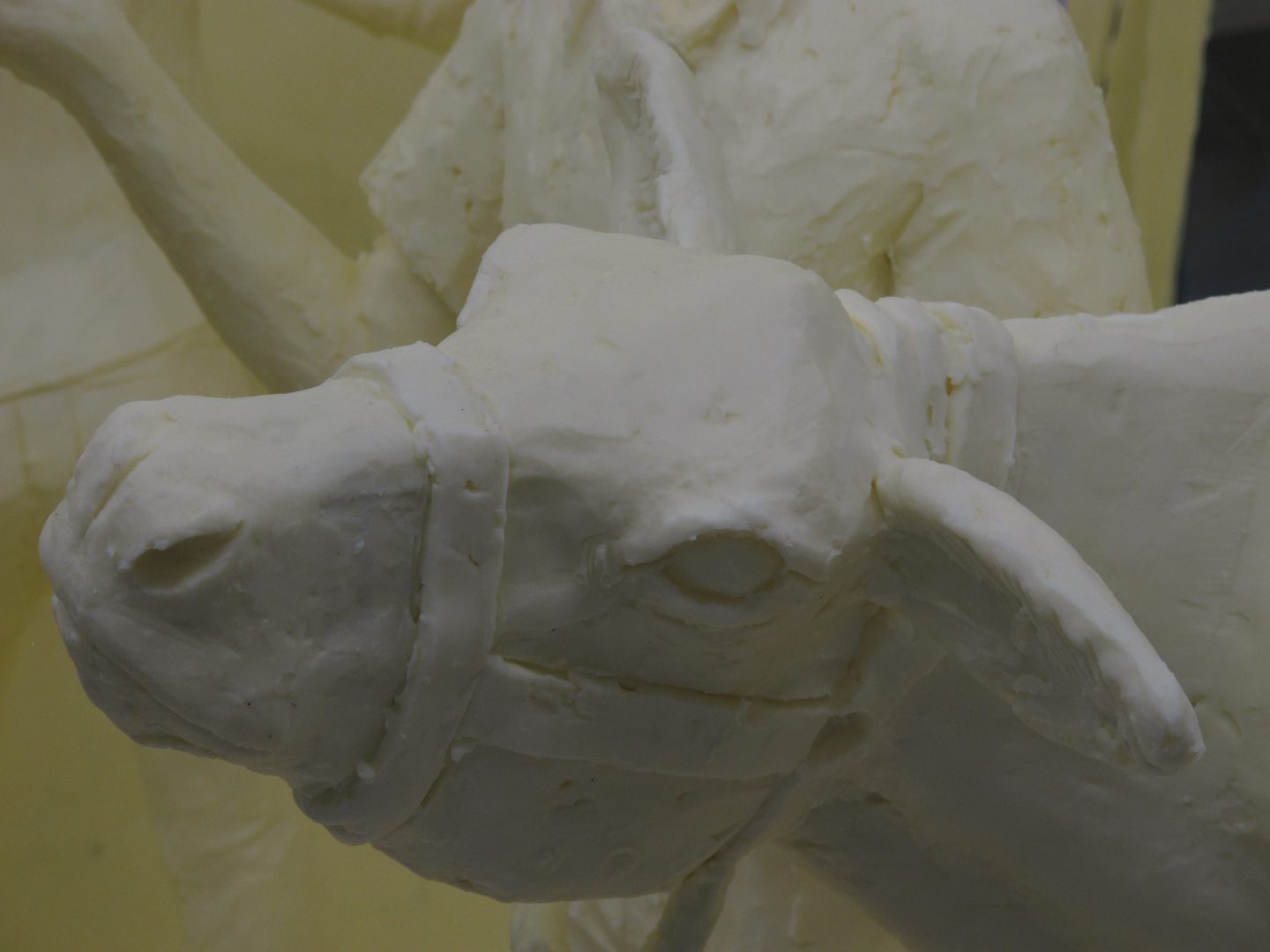 A Farm Show visitor checks out the butter sculpture

A dizzying fall from grace is in store for the Pennsylvania Farm Show’s famed butter sculpture.
Through tomorrow, the thousand-pound work of art will be the star attraction of the annual indoor agriculture festival. Thousands of people have snapped pictures of the refrigerated sculpture, which depicts a boy leading his prize-winning calf through a county fair.
Next week, however, a Juniata County farmer will unceremoniously dump it into a manure pit.
That’s because he’s turning the sculpture into methane gas. One thousand pounds of butter, it turns out, creates enough energy to power a farm for three days.

How does this work?
Mary Hoffman and Linda Mustacchia – both from Allentown – couldn’t figure it out as they peered at the sculpture through its eight-sided display case. “I don’t know, but I’m glad they’re doing that,” said Hoffman, who was worried the sculpture would have otherwise been thrown out. “I like butter,” she said. “But that’s a lot of butter.” Turns out, butter becomes gas through the work of a methane digester. Glenn Cauffman, the manager of Penn State University’s Farm Operations, said the butter will be dumped into a big heated tank where microorganisms will feast on it. “Those microorganisms can break those fat molecules apart into the less complex molecules,” he explained. “Then further take that to produce a gas called methane, which burns readily in an engine, and can be converted into…electricity.”
As long as the farmer keeps the digester hot, the bacteria will do all the work. “Those organisms at a hundred degrees, are working hard,” said Cauffman. “They’re trying to live. They’re trying to reproduce. They’re trying to eat food, be happy, make more bacterial.”
Steve Reinford is the lucky dairy farmer who will take custody of the sculpture. He’ll be the one dumping it into the manure pit, where it will sit for several days, before he grinds it into fuel and feeds it into the digester.
Reinford said it will take about five days to load the butter/manure mix into the tank.  “And as it’s heating it’s breaking down. It’s going to take probably up to 25, 30 days to break it down completely. And that will make the methane. And then I’m going to run a generator,” he said.
Reinford has been generating energy this way for a while. He said he gets a lot of fuel from the nearby Walmart, which hands over food product that has gone bad. The methane digester creates so much energy, Reinford said, that he sells it back to the grid.
He expects the butter sculpture – or what used to be the butter sculpture – to power his home and farm for about three days.
Reinford did make sure to visit the Farm Show, to see the sculpture on display. “I took a lot of pictures of it down there so I’d be able to see it before and after. We’ll actually enjoy the heat – the electricity in our houses about a week, two weeks from now.”
Today’s butter is tomorrow’s energy.