A well pad on a Tioga County farm. Although gas drilling is allowed in most of the state, there is a moratorium against drilling in the eastern part where the Delaware River Basin Commission has jurisdiction.

Governor Corbett's Plan To Impose An Impact Fee On Pennsylvania Drillers: A Primer 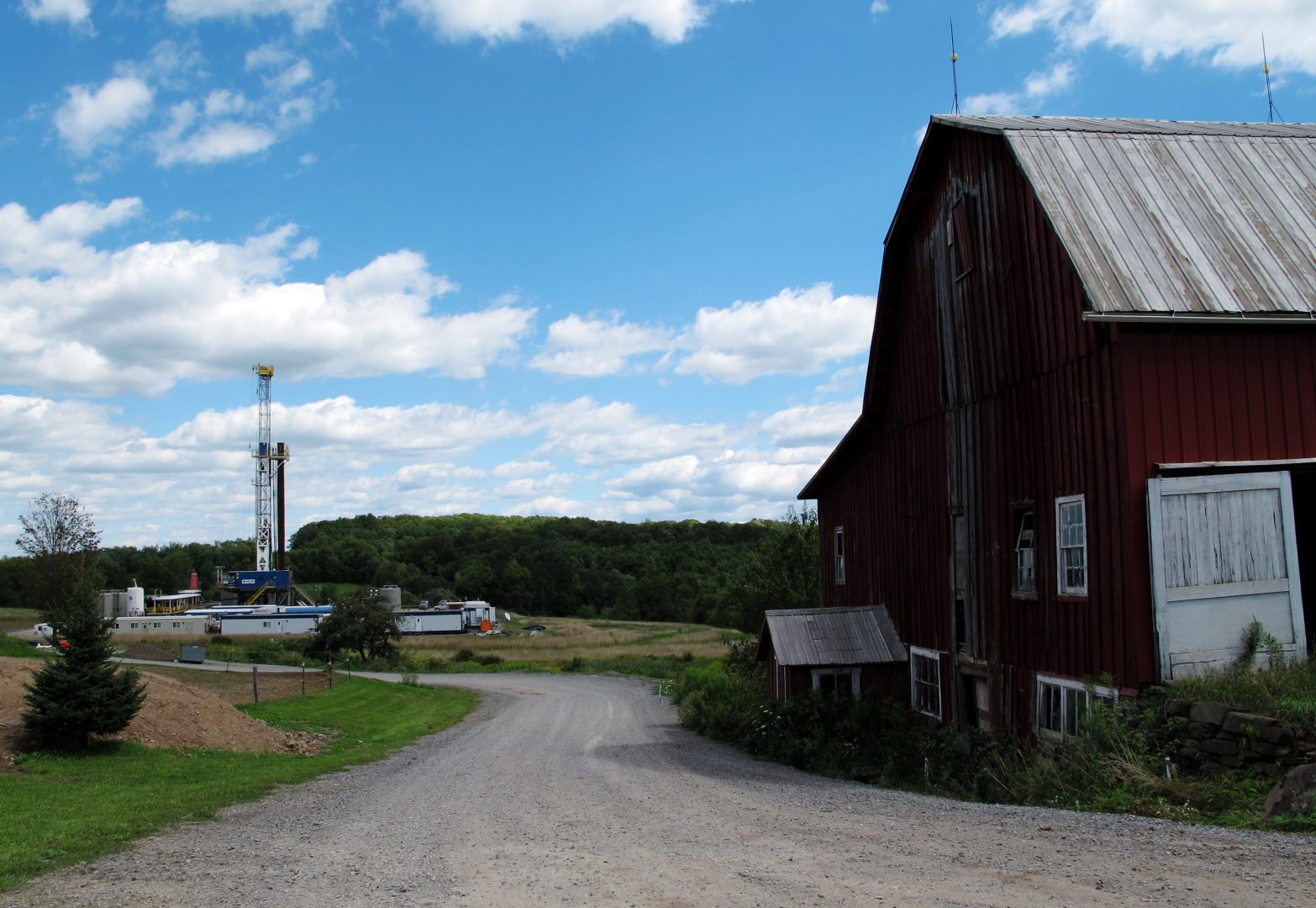 A well pad on a Tioga County farm. Although gas drilling is allowed in most of the state, there is a moratorium against drilling in the eastern part where the Delaware River Basin Commission has jurisdiction. A well pad on a Tioga County farm

Republican Governor Tom Corbett unveiled his long-awaited proposal to levy an impact fee on
Pennsylvania’s natural gas drillers on Monday.
The plan would charge a $40,000-$10,000 fee per well, and direct the bulk of its revenue to county and local-level governments who are dealing with the clogged roads, uptick in emergency service demands and other negative offshoots of Marcellus Shale drilling.
Trying to get up to speed on Corbett’s plan? Here’s a primer on everything that happened this week. Corbett announces his plan in Pittsburgh

How We Got Here
First, a bit of background. Pennsylvania is the only major energy-producing state that doesn’t assess a tax or fee to natural gas extraction. In 2009 and 2010, Democrats tried, failed, tried again, and failed again, to pass a tax into law.
Then, Republicans took control of the House and governor’s office. Corbett made it clear he’d veto any tax that reached his desk. In an April speech, he called the idea of taxing an industry simply because it was successful  “un-American.”

Corbett used a speech before the State Association of Township Supervisors to lay out his case against a tax. It’s the most detailed explanation he’s given to-date on his reasons for opposing a drilling levy. He said drilling is “hiring Pennsylvanians and giving hope” in rural pockets of the state, and that the economic growth is indirectly boosting tax revenue.  “Those are people that are back on the employment rolls. Those are people that, if they were on welfare, they can be off welfare now,” he said. “ That we won’t be spending state tax dollars on. Those are people that have salaries that will pay income taxes. That will go and buy goods. That will pay sales taxes. And the people who sell them the goods now have jobs that are growing.”

With Corbett standing firm, lawmakers began discussing a fee, rather than a tax, that could help local governments deal with drilling’s strain. Senate President Pro Tem Joe Scarnat, who helped kill off a tax in 2009, emerged as a key proponent of an impact fee. He unveiled a bill in April, and pushed for its passage along with the state budget. But Corbett stopped the Scarnati plan in its tracks, by vowing to veto any  bill that reached his desk before his Marcellus Shale Advisory Commission, a panel he appointed to suggest drilling policies, issued its final report. That report came out in late July. Among its 96 suggestions – and you can read key excerpts here – was a proposal to impose a local-level impact fee on drillers.
Then, everyone waited. And waited. A month after the report came out, Corbett was still vague on what suggestions he agreed with, and what policies he’s push for.
The Plan
Last Friday, StateImpact broke the news Corbett was ready to unveil a plan.
Corbett rolled out the proposal on Monday morning, at Pittsburgh’s Carpenters Training Center. You can watch video of the press conference at PCN’s website.
He called for a maximum first-year fee of $40,000-per-well, with a gradual reduction to $10,000, after four years. Corbett said the plan would generate $120 million statewide in year one. The catch? Counties, not the state, would implement and collect the fee. They’d have an option of a lower rate, or no rate at all.
While Corbett’s impact fee got the bulk of attention, his proposal had broader components, too.

The gov­er­nor wants to increase the min­i­mum dis­tance between a gas well and streams, rivers, or pri­vate water sup­plies. He also wants to up the amount of money drillers pay to bond their wells, and dou­ble penal­ties for civil vio­la­tions, from $25,000 to $50,000. Another major pro­posed change would be to increase the “pre­sumed lia­bil­ity” for drillers from 1,000 feet to 2,500 feet. That means if a per­son lives within 2,500 feet of a drilling site, and his or her water sup­ply goes bad, the energy com­pany would assume the legal lia­bil­ity for the problem.
Finally, the incen­tives: Cor­bett wants to set up “green cor­ri­dors” through­out Penn­syl­va­nia, with nat­ural gas fuel­ing sta­tions every 50 miles. It’s unclear how he’d fund this effort, though part of the money would come from incen­tives his plan offers drillers. Energy com­pa­nies could reduce their fee pay­ment by up to 30 per­cent, by “[mak­ing] improved invest­ments in nat­ural gas infra­struc­ture.” That includes “set­ting up nat­ural gas duel­ing sta­tions or nat­ural gas pub­lic tran­sit vehi­cles,” accord­ing to Corbett’s press release.

Negative Reaction
Corbett’s county-level impact fee led to concerns from both the drilling industry and county officials, who worried it would create a patchwork system, where things change from county to county.

One con­cern, [County Commissioners Association of Pennsylvania Executive Director Doug] Hill said, was the pos­si­bil­ity of an eco­nomic “bor­der war.” “One county levies [a fee],” Hill explained, “and its neigh­bor doesn’t, [think­ing], we’re going to be more com­pet­i­tive than you are.”
Indeed, coun­ties wouldn’t need to set their own rates, under Corbett’s plan. And the $40,000 first-year fee is a ceil­ing, not a stan­dard. So Wash­ing­ton County could set a $30,000 fee, while neigh­bor­ing Greene opts for a lower $5,000 rate.
Would the dif­fer­ence be enough to push the drilling indus­try out of one county, and into another? Mar­cel­lus Shale Coali­tion pres­i­dent Kathryn Klaber said it’s a pos­si­bil­ity. “Any time you’re putting a higher fee or a dif­fer­ent kind of admin­is­tra­tive bur­den, all these things add up,” she said. “It’s clear the Coali­tion would be accept­ing of a mod­est, com­pet­i­tive fee, [but] as you start adding up, [a higher fee] can have a dis­cour­ag­ing effect on cap­i­tal invest­ment. Because every sin­gle well is assessed for what kind of return it would deliver. There’s no doubt a fee or tax goes into that calculation.”

CCAP formalized its concerns later in the week, after its members held a statewide conference call to discuss the proposal.
Top lawmakers shared those concerns, as we wrote on Tuesday. “Sen­ate Major­ity Leader Dominic Pileggi said a county-level assess­ment is ‘tech­ni­cally pos­si­ble,’ but ques­tioned its wis­dom. ‘It would be eas­ier to have a statewide tax imposed and col­lected. …You avoid the chal­lenges of oper­a­tions that over­lap mul­ti­ple county juris­dic­tions. And you have a pre­dictable tax assess­ment sys­tem in place, so peo­ple doing busi­ness across the state have one office they need to com­mu­ni­cate with.'”
But for now, Corbett is sticking to the county-level plan. At a mid-week press conference, he said local officials need to decide for themselves whether or not they need a levy. Not coincidentally, Americans for Tax Reform leader Grover Norquist, who administers the “no new taxes” pledge Corbett signed onto during the 2010 campaign, told StateImpact the fee plan would constitute a tax, if it’s levied by the state.

The plan, as it stands, is “clearly mov­ing in the right direc­tion,” said Norquist, who heads Amer­i­cans for Tax Reform. He likes the fact that coun­ties, not the state, would decide whether or not to imple­ment the levy.
If this changed to a state-assessed sys­tem, it would count as a tax increase, Norquist said. That wouldn’t nec­es­sar­ily mean Cor­bett vio­lated his pledge, though. “You’d just have to have an off­set­ting tax decrease some­where else,” he said.

The Road Ahead
What happens next? Corbett staffers begin sitting down with legislative leaders, to hash out their differences and work the administration’s proposals into a specific bill. Republican Senator Joe Scarnati has called for a bill to become law by the end of the month. Corbett has shied away from deadlines and ultimatums himself, but says he shares Scarnati’s desire to resolve the issue soon.
Something will likely pass, whether that happens in October, this winter, or early next year. Why? Because ultimately, politics drives what happens in Harrisburg, and Marcellus Shale has become a major political football. More than 60 percent of Pennsylvania residents support some sort of levy on drillers.
Looking for more information? Check out our topic page, which hosts every story we’re written about impact fee proposals.