On Airwaves, By Roadsides, a Drilling Industry Ad Blitz 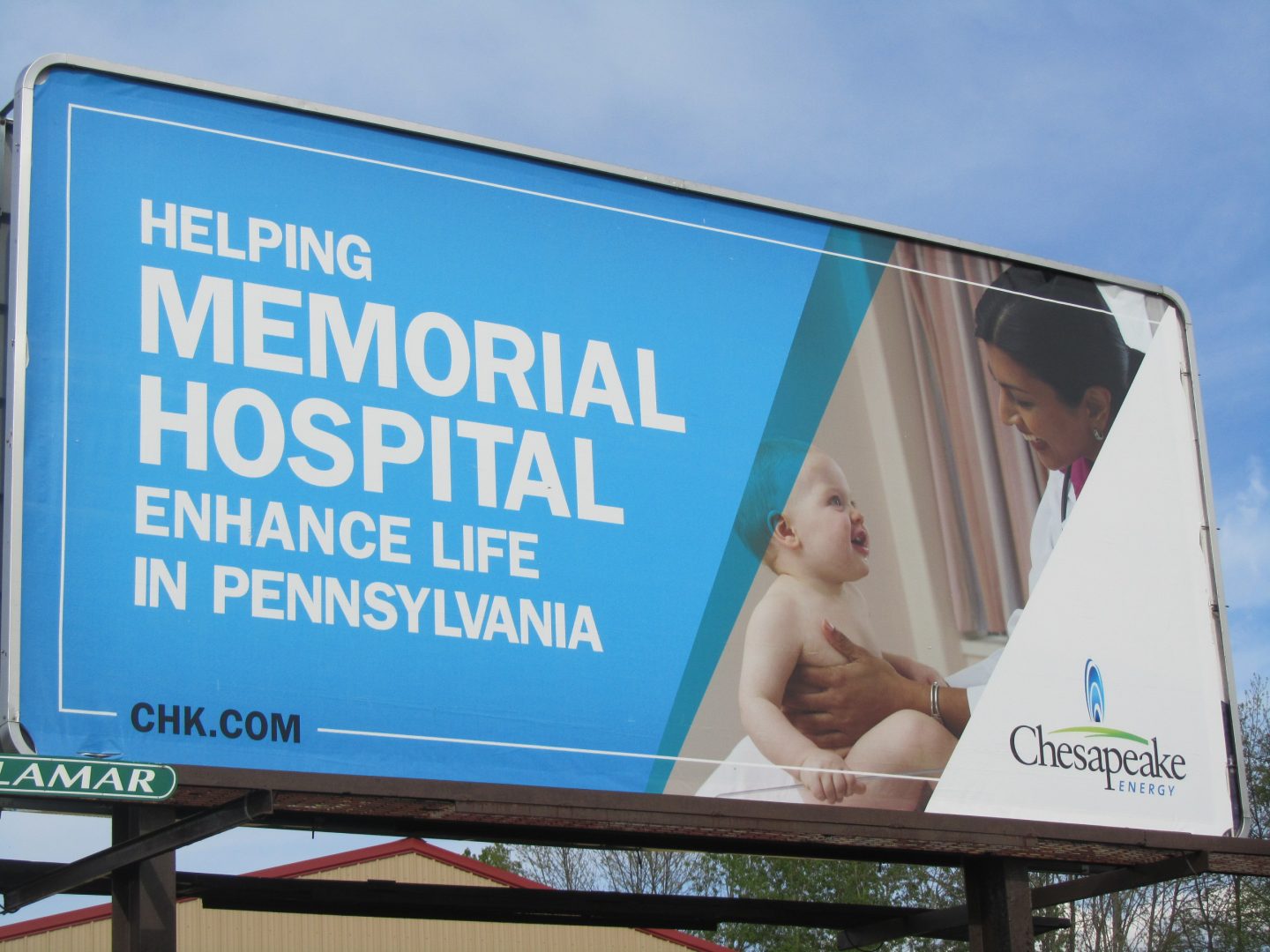 The argument over natural gas came to Philadelphia this week, the one Pennsylvania city that lies above no shale gas deposits. The Marcellus Shale Insight conference at the Pennsylvania Convention Center has drawn more than 1,500 industry participants. Outside, protestors took to the streets to rally against drilling, saying it threatens the environment and public health. Environmentalists worry about fracking, a process used to extract the gas using high pressure water, sand and chemicals. The debate also has hit the nation’s airwaves, as the drilling industry spends millions to respond to its critics.

“My Dad, all he wanted was for us to be successful, I wish he were here to see how we’re doing now. I know he would be proud of us.”
The woman was a waitress, but landed a better job with a drilling subcontractor.
Two years ago, Marcellus Shale and fracking were novel terms to Pennsylvanians. Now the name for a rock formation that holds a storehouse of natural gas, and the slang term for a process to get that gas, are nearly household words.
The new natural gas ads don’t sell a product. Instead, they sound like ads from a political campaign. Exxon Mobil has one that features a professorial scientist explaining hydrofracking and horizontal drilling.
“There’s a lot of discussion going on about the development of natural gas, whether it can be done safely and responsibly. At Exxon Mobil we know the answer is yes. When we design any well, the ground water is protected by multiple levels of steel and cement, most wells are over a mile and a half deep so there’s a tremendous amount of protective rock between the fracking operation and the ground water. ”
So why do companies large and small feel the need to promote drilling? Because of the media attention being given to people like Craig and Julie Sautner of Susquehanna County.
“It makes us mad because it’s a lie, they show pretty flowers, and green fields, and that it’s a clean fuel. It may be clean to burn but its not clean to get. These people haven’t seen the dirty process that drilling and fracking is.”
The Sautners have not been able to drink their water for three years. State regulators agreed that drilling by Cabot Oil and Gas was at fault. The Sautners decided to launch their own ad campaign, paying for an anti-gas drilling billboard in Susquehanna County.
While people such as the Sautners’ protest locally, energy companies seem to be advertising globally. Why? Greg Matusky runs Gregory FCA, a Pennsylvania public relations firm that has an energy company for a client.
“I think you’re seeing it nationwide because there are influences at every level of our culture. And they’re all not located specifically in Blair County, Pennsylvania. And Marcellus Shale is not the only natural gas play and so there are other places around the country that are very productive and it’s meant to educate in those areas also.”
Matusky says natural gas drilling is not new, but the public scrutiny is. And, he says, that took many in the industry by surprise.
“And that’s one of the reasons you’re seeing such an intensive communications effort. It’s analagous to what Mobil Oil did in the 1970’s and 80’s when they advertised their positions in national publications such as Time Magazine, Business Week and others.”
Matusky says drillers can make a case that all energy production involves risk, but the downsides of natural gas are less than those for nuclear or coal.
But negative publicity about fracking makes it harder for people like Matusky and Aubrey McClendon to sell that clean fuel message.
McClendon, CEO of Chesapeake Energy, had to walk past hundreds of protestors on his way into the Philadelphia conference:
“I did look outside and looked for a lot of love around the corner and I didn’t feel a whole lot, I didn’t see a whole lot. I didn’t see a lot of truth either.”
Each side lays claim to the truth. But drilling critics wield the most arresting image — You Tube videos of residents lighting their tap water on fire, because of high levels of methane in their water wells.
Dan Whitten is a spokesperson for America’s Natural Gas Alliance, which just began its own national ad campaign.
“There’s naturally occurring methane in water supplies all over this country and yet there’s this misperception that every time there’s methane in someone’s water supply it comes from natural gas drilling and that is patently untrue.”
While ANGA’s ads proclaim drilling’s safety, new billboards up and down the Pennsylvania Turnpike tout jobs and revenue.
But what about the billboard the Saunters paid for? Well, it’s no longer there. After two days, the billboard company took it down, refunding the couple’s money. Why? The message was too controversial.