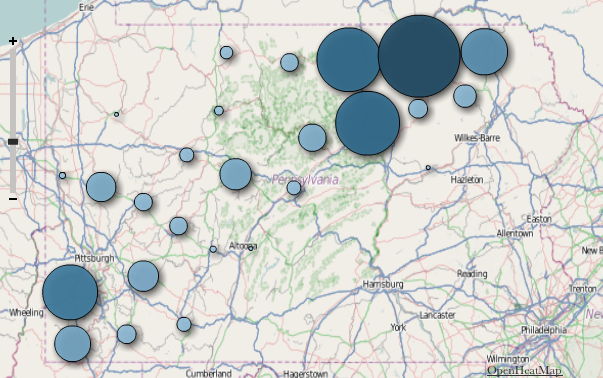 Here’s one more visualization from this month’s Marcellus Shale Advisory Commission report.
A graphic on page 35 shows drilling activity during the first six months of 2011, broken down by county. A few things jump out.

First, while 32 counties host gas wells, the bulk of activity is still taking place in a handful of drilling-heavy counties. More than 60 percent of the 739 wells drilled between January and June were located in the five busiest counties — Bradford, Tioga, Washington, Susquehanna, and Greene. Bradford and Tioga Counties alone are responsible for nearly 40 percent of 2011 drilling activity. Here’s a proportional symbols map of wells drilled:

The second takeaway is the disparity between permits acquired and wells drilled. The following map shows permits issued this year, by county.
The data serves as a reminder that permits aren’t necessarily a good indication of how much drilling is going on in a county. Energy companies have filed for 339 permits in Bradford County this year, for example, but have only drilled 173 new wells. Nearly a thousand permits went through in Washington County, with just 78 wells beginning operations.
That disparity aside, the same usual suspects – Washington, Bradford and Tioga Counties —  are leading the pack, when it comes to permits issued. Susquehanna and Lycoming round out the top five.