To Help Save Monarchs, Oklahoma Conservationists Work to Repair a Plant’s Weedy Reputation 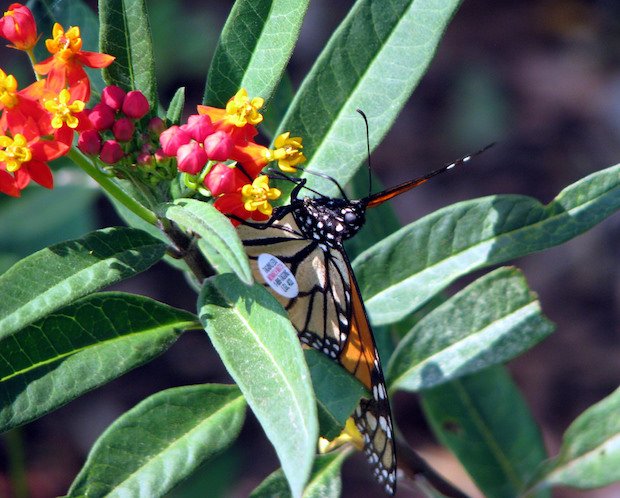 Stephanie Henson admires her colorful backyard garden in Edmond. Approaching a pink-and-white plant, she squeals and laughs and she spots some butterflies.

Henson doesn’t know much about gardening, but she’s doing what she can to attract butterflies, which is what conservation specialists and government officials are trying to encourage here in Oklahoma and across the country.

The striking orange-and-black Monarch is a staple of fall in Oklahoma, but recent studies suggest the butterfly’s population in North America has decreased by more than 90 percent and could be extinct in 20 years. Researchers say the drop is worsened by declining numbers of milkweed plants, which are essential to Monarch survival.

The need for weed

There’s a reason milkweed is such an integral part of Monarch conservation: It’s the only plant the butterfly will lay its eggs on, and the only plant its caterpillars will eat.

A lot of gardeners, however, hate milkweed. The plant has a reputation as an invasive and ugly nuisance that many residents and governments, historically, have worked to remove. Residents, researchers and governments in Oklahoma are part of a national conservation effort that centers on changing attitudes and increasing numbers of the often-unpopular plant.

Local governments and Native American tribes are working together to increase Monarch populations. Hundreds of cities across the country have signed onto a “Monarch Pledge” organized by the National Wildlife Federation, including eight here in Oklahoma.

Chief Gary Batton of the Choctaw Nation and Jerry Tomlinson, mayor of Durant, signed the agreement in June.

“It’s about making a difference to the pollinators so that we can continue to have plants and trees and flowers that produce the food that we all need to be able to eat,” says Tracy Horst, director environmental stability for the Choctaw Nation.

Horst says the Choctaw wants to expand the program to other nearby cities.

The U.S. Fish and Wildlife Service provides Monarch education programs to local schools, and has reimbursed landowners for planting milkweed. While these efforts have seen successes, Oklahoma officials are creating a statewide conservation plan, which should be complete by the end of the year.

Zoos and gardens around the state hand out milkweed plants to encourage visitors to help by creating their own Monarch habitats. Nationally, groups are encouraging local governments to remove milkweed from lists of “noxious” plants.

“The good news for Monarchs is that they are a species of high interest right now,” says Rebecca Snyder, a conservation specialist at the Oklahoma City Zoo. 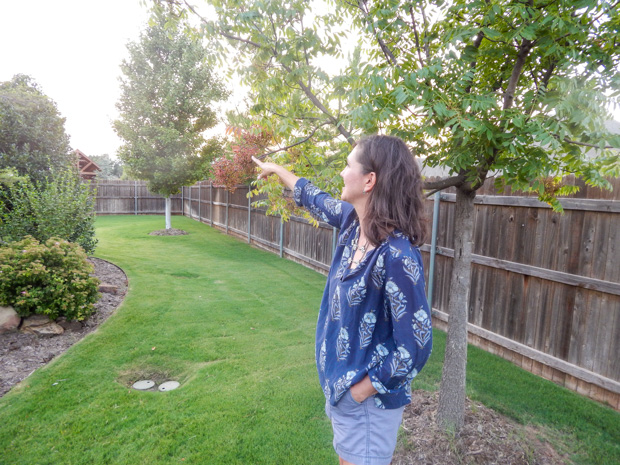 Stephanie Henson points out plants in her backyard garden in Edmond, Okla.

The Oklahoma City Zoo has a designated butterfly garden and works with a program called Monarch Watch to tag butterfly wings to track how how weather and climate affect migration patterns.

“It provides really important information,” Snyder says. “ It’s part of how we know that Monarch populations are in steep decline.

Katie Boyer, an outreach specialist from the Texas and Oklahoma division of the U.S. Fish and Wildlife Service,” says the information from the tagging program is added to a national database.

“That will give us quantifiable information about how much habitat exists and how much we think will exist in the future,” she says.

In the backyard garden in Edmond, Stephanie Henson says she understands why some Oklahomans might not like milkweed, “but I’ve never really met a person who doesn’t love a butterfly.”

Conservationists say Oklahomans can protect Monarchs by limiting use of pesticides and supporting local gardens. The best way to boost the numbers of butterflies, researchers say, is for residents and governments to learn to love milkweed and let it grow.

“It really is an all-hands-on-deck situation now,” says conservation specialist Rebecca Snyder. “We need everybody now, even if it’s just a small area in your backyard.”