When School Lets Out and Meals End, Educators Struggle to Feed Students Over the Summer 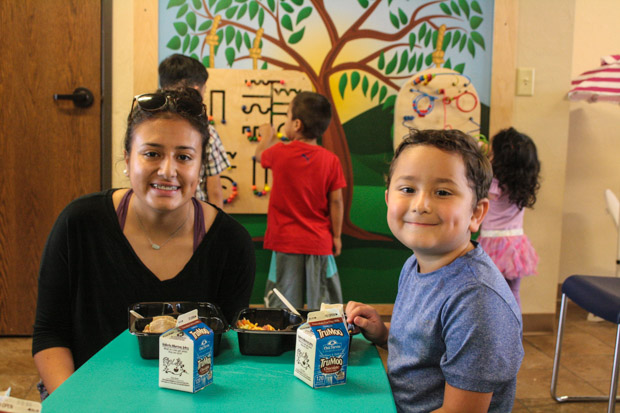 For some low-income children in Oklahoma, summer does not mean vacation and playtime — It means being hungry. The lunch and breakfast these kids receive at school is no longer readily available, so they often go without — or they eat junk food. And while Oklahoma has summer food programs to combat this, there are roadblocks for many children.

The gap in access to healthy food is a potential problem for more than 400,000 Oklahoma children.

The State Department of Education estimates 61 percent of Oklahoma students qualify for free or reduced-price meals during the school year, but only 6 percent participate in the Summer Food Service Program.

Angie Doss, the Director of Marketing and Communications for the Regional Food Bank of Oklahoma says this means Oklahoma ranks the worst in the nation in providing summer meals to children.

For once, Doss says recent state budget cuts are not the issue here; the education department’s summer food program is federally funded. However, Oklahomans are are more likely to need food assistance when state services are cut, she says

Ultimately, Doss thinks Oklahoma’s low participation rate is caused by a lack of feeding sites around the state, and a shortage of volunteers.

State Superintendent of Public Instruction Joy Hofmeister agrees this is a major problem, but she thinks kids and families also could be embarrassed to take advantage of the program.

“In some ways I think that there is a sense of pride, that families want to make sure that they provide on their own,” she says.

Hofmeister says when kids are enrolled in the free lunch program during school, no one knows, and they’re less nervous about signing up. Seeking out free meals during the summer, however, runs the risk of exposing and embarrassing kids who need help.

One way of combating this is to get more groups across the state to serve meals, Hofmeister says. Churches, nonprofits, schools and summer camps are all eligible to serve food, which can help kids find a food program where they can blend in with their peers.

Increasing general awareness of the program might help remove the stigma, too, she says.

The State Department of Education recently launched Food For Thought, a campaign to get the word out to more people. They’ve put signs on bus benches, and created public service announcements to air on the radio.

There’s also a new texting service for those looking for meals. Oklahomans can text the word “food” to 877877, enter an address or a zip code, and receive a list of nearby locations that serve.

Another barrier, Hofmeister says, is transportation. “Many of our students just can’t get to a location site,” she says.

One way to combat this is partnering with food trucks, which Hofmeister says the education agency is pursuing. 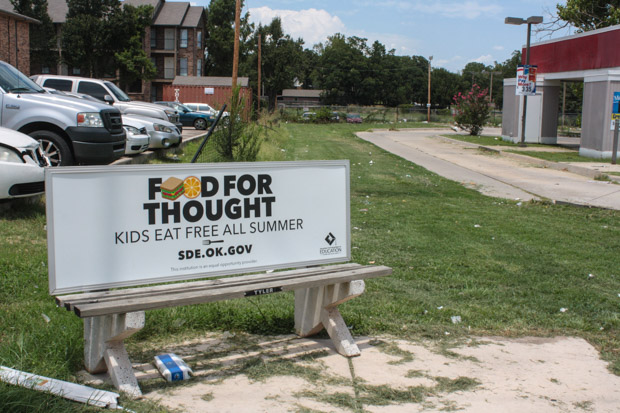 The Oklahoma State Department of Education is trying to spread awareness of the summer feeding program through bus benches and radio PSAs.

Seventeen-year-old Dulce Diaz from western Oklahoma City says she uses the summer food program at least twice a week. For her it’s a life-saver.

“It would be kind of hard just to know where to get food,” she says.

When Diaz is in school, she automatically gets breakfast and lunch because she qualifies for the free and reduced-price meal program funded by the government. But when classes end and summer comes, she says that meal security goes away.

“You don’t get healthy food just for a cheap price,” she says.

Diaz loves the program, but there’s a hitch: It ends in July, and school doesn’t start until the middle of August. “I try to save money so I can get food for the rest of the month until I go to school.”

Another girl who uses the program is 18-year-old Heidi De Leon. She usually brings her younger brother and says, without the program, they would probably eat a lot of cereal. Ever since De Leon’s started using the program, her friends have asked about it.

“I have a lot of friends that actually don’t have food at home, so a lot of them have been asking me to give them food, or stuff like that,” she says.

De Leon says she encourages her friends to use the program, but so far they haven’t.

It’s too early to know whether any of the department’s efforts are working.

Angie Doss with the Regional Food Bank hopes Oklahoma isn’t ranked last in summer feeding programs next year. To do that, Doss says state agencies and outreach groups need to step it up because the number of Oklahoma kids who qualify for food assistance programs grows every year.