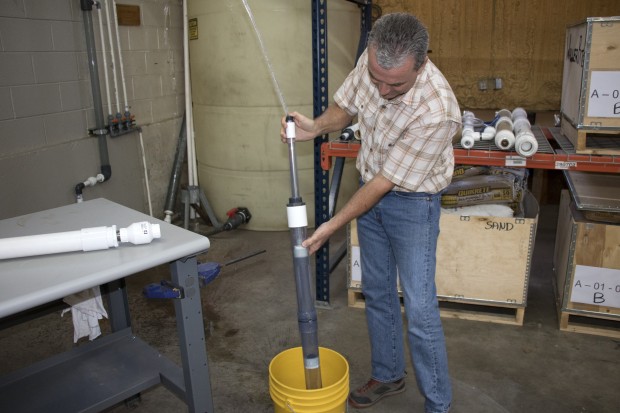 Oklahoma’s small water systems face a big problem: Drinking water standards are getting stricter, their treatment plants are becoming obsolete, and many cities and towns can’t get the loans and grants needed for expensive upgrades. But one Oklahoma City company says it found a potential solution — in Africa.

From Africa to Oklahoma

Water4, a nonprofit based in a former chop shop in Oklahoma City, is an unusual charity. In fact, founder Richard Greenly doesn’t like being called a charity at all.

“We don’t give stuff away,” he says. “We empower people.”

“The problem is well meaning non-profit organizations come in, and they shove the people aside, and they say, ‘we’re going to fix your problem for you,’” Greenly says. “And they bring in a million dollar drilling rig. Their water squirts out of the ground. Everybody’s cheering. Everybody gets their photo-op. The rig drives away. The nonprofit goes home. The well breaks in 11 months.”

The idea is for locals to use that knowledge to start their own water well drilling businesses that charge about a penny a gallon. That money is used to maintain and expand the business to eventually treat water and pipe it to peoples’ homes.

These tiny, private water utilities are springing up all over the continent, and provide the inspiration for a new option for small Oklahoma systems that can’t afford expensive new water treatment plants.

Can’t someone else do it?

“The next 50 years, infrastructure need is over $82 billion just in the state of Oklahoma for drinking water and wastewater infrastructure,” J.D. Strong with the Oklahoma Water Resources Board tells StateImpact.

Small systems are least able to afford such outlandish costs, can quickly max out their ability to get giant loans, and grant money is scant.

In early 2014, a for-profit company sprung out of Water4: Community Water Solutions. Since then, CWS project manager Tyler Butel has been pitching small town leaders on a way out.

CWS will build a water treatment plant for a small town, with the company’s own money. The city doesn’t have to spend a dime on it.  To recoup the cost, CWS charges people for the clean water they use.

“But now what they’re paying for is nitrate-free water,” Butel says. “They’re not paying for a couple of vessels, and a bunch of pumps, and a salt tank, and whatever else is needed for that process.”

The company owns the plant. When it breaks down, it’s up to the company to fix it. Butel says CWS will only sell clean water, so there’s plenty of incentive to keep the system running properly.

“They could raise their water rates and get a big loan and put a system in, or we could put in a system for them and make sure they’re getting clean water,” Butel says.

None of this runs afoul of any state laws as far as the Water Board’s J.D. Strong knows. He says he welcomes creative solutions to Oklahoma’s multi-billion dollar water infrastructure problem.

“We’re somewhat used to that on our electric utilities, so it’s not a vastly different model for water utility,” Strong says.

But there are issues with turning water treatment over to a private company. It’s a big change from how treatment has always been done in Oklahoma.

Richard Raupe is mayor of Okarche, a small town just northwest of Oklahoma City with a nitrate problem CWS approached with its idea. Raupe thinks it has merit, but there’s a big sticking point:

“Well, we believe the town of Okarche should own their own water system and their own processing plant,” Raupe says.

So far, no towns have taken up CWS on its offers. That first customer is always the hardest to get.