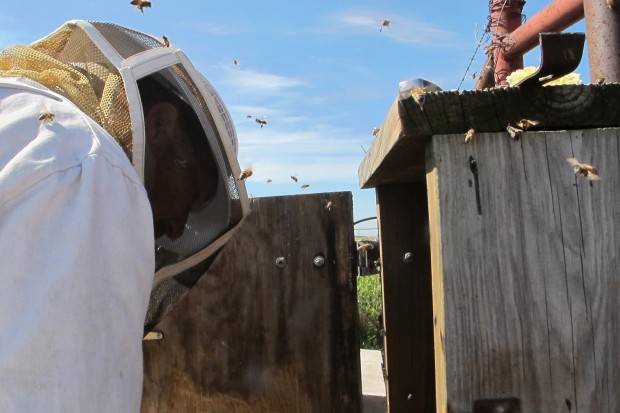 Oklahoma lost a greater percentage of its honeybee colonies than any other state over the last year. On Tuesday, beekeepers, scientists, and farmers gathered at Langston University’s Oklahoma City campus to give their input on a plan to better protect pollinators of all kinds.

The discussion centered on balancing the need to apply pesticides to crops, with the dangers those chemicals pose to pollinating insects. The main point of contention was whether to make the location of managed colonies available online. It would allow pesticide applicators to avoid bees, but would also let potential thieves to know exactly where the valuable hives are.

The EPA is writing new rules to help bees, but the Oklahoma Department of Agriculture, Food and Forestry is gathering comments as it finishes a state-based plan — at public meetings across the state.

“How’s an applicator supposed to know where the beehive is if it’s not listed somewhere where they can check the records?” Joe Hampton, president of the Oklahoma Agribusiness Retail Association asked.

The health of the thousands of managed, commercial honeybees hives that are vital to crop pollination in Oklahoma was the top concern at the meeting, but the precipitous decline in wild bee populations was also a major concern.

“10 or 15 years ago, in three counties out there, I could tell you where 25 wild hives of bees were,” Jimmy Shobert with the Oklahoma Beekeepers Association told the crowd of about 70. “Today I can tell you, probably, three or four hives is all that’s left out there.”

The myriad of factors causing pollinator losses, from parasites to habitat destruction, make the prospects for a turnaround seem dim, but there was plenty of hope at Langston on Tuesday. One reason why is that bees, like any living thing, need water. Unlike the past few years, they’ve got plenty of water now.