Oklahoma, Where Wind and Jobs Sweep Down the Plains Jessie Bean, a wind technology student, peers out of the top of a 13-story training tower in El Reno.

The amount of wind energy has increased dramatically over the last decade, along with the number of wind farms around the country and in Oklahoma.

The industry is building more turbines than it can maintain, officials say, and Oklahoma is working fast to fill the job gap.

Wind is as Oklahoman as oil and natural gas.

Culturally, it’s part of the state’s identity. Economically, it has big potential as a clean-energy commodity.

There are about 40,000 wind turbines online in the United States, says Ellen Carey, spokeswoman for the American Wind Energy Association.

Once constructed and calibrated, wind turbines need regular maintenance during their 20 to 25-year lifespan. And there’s a shortage of qualified technicians, Carey and other officials tell StateImpact. A band of wind energy potential bisects the United States.

The state’s first commercial wind farm came online in 2003, and there are 17 wind farms currently online in Oklahoma, says Kylah McNabb a wind energy development specialist at the state Department of Commerce.

Oklahoma’s wind farms are clustered in the western half of the state, most near Woodward, Elk City and Lawton, where the wind energy potential is the greatest.

But the U.S. wind industry has suffered blows in recent years.

Nationally, wind energy capacity hit a peak in 2009, according to the U.S. Department of Energy.

Low natural gas prices, cheap wholesale electricity and a global financial crisis took wind out of the industry’s sails in 2010, “a trying year” that brought big reductions in new wind farm builds, the Department of Energy wrote in its most recent “Wind Technologies Market Report.” Wind energy — like most emerging industries — is expensive and capital-intensive. Buying land, and building and erecting turbines is part of it, but wiring up often-isolated wind farms to the electric grid often means building new, transmission-grade power lines, costs that customers ultimately help underwrite with their electric bills.

Despite the slowdown in new wind power projects, overall wind power capacity increased by 15 percent in 2010, and the Department of Energy expects that capacity to have grown again in 2011.

Things could get worse. Congress might not renew a federal subsidy for wind farms, which expires at the end of next year. The industry depends on the credit, reports NPR’s Richard Harris, and tens of thousands of jobs are at stake.

In Oklahoma, tax credits for the wind industry were among those scrutinized by an interim task force.

Of the 28 states that added new large-scale wind turbine installations in 2012, Texas was tops — adding 680 MW of wind power to the grid.

Oklahoma generated a little more than half that during the same year, and ranked No. 6 in wind power capacity. Oklahoma wind turbines produced 5.1 percent of all in-state power in 2010, which means the state ranked No. 10 behind Texas’ 6.4 percent.

But wind energy boosters here say Oklahoma has more than double the “wind energy potential” as its Red River rival.

By 2030, Oklahoma could be the second-largest wind power generator in the U.S., officials at the Department of Energy and state Department of Commerce say. Oklahoma would like to train students for many of those maintenance jobs, both in state and with companies that own wind farms in other states, but it’s unclear how many wind technicians are actually needed.

“It’s an industry need,” says Bill Kramer, spokesman for the Canadian Valley Technical Center. “Wind farms are popping up all over the state of Oklahoma.”

Technology centers, including High Plains in Woodward, Francis Tuttle in Oklahoma City and Canadian Valley in El Reno, offer short-term certificate programs designed to train students on the basics so they can get entry-level jobs in the field, where wind companies will provide additional training to the specific turbine model used.

The Level 1 class takes four weeks, and its only prerequisites are a GED or high school diploma, the physical ability to climb a really, really tall ladder, and the mental capacity to handle working in a tiny box perched hundreds of feet in the air that sways in the wind.

Entry-level jobs pay start out at more than $20 an hour, says wind technician instructor Randy Tharp. Once trained and employed, wind technicians will likely climb towers almost twice as tall as the training tower at Canadian Valley Tech, he says.

“I’m not going to lie, it’s gets scary,” says student Kevin Bradshaw. “It would be a big problem if you didn’t have fear.”

Strapped snugly in a web of harnesses, clips and brightly colored safety gear, Bradshaw and his cousin, Jessie Bean, laugh while walking toward the training tower.

“He’s been wanting to climb all week,” Bean says, pointing at his classmate. “He won’t shut up about it.”

Bradshaw beams. He’s excited about his new job prospects. A former culinary student who’s quick to joke about his own waistline, Bradshaw’s been running and walking every morning to make sure he’s in prime climbing shape.

“I’ll be right back,” he says, grabbing the ladder. “Want me to wave to you when I get to the top?” 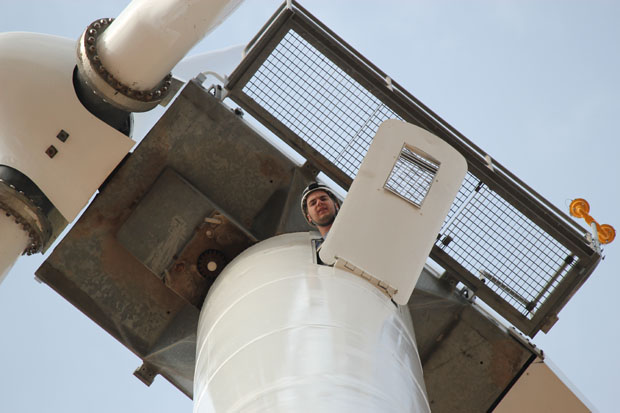 Wind energy student Jessie Bean peeks out of the top of a 13-story wind turbine in El Reno. 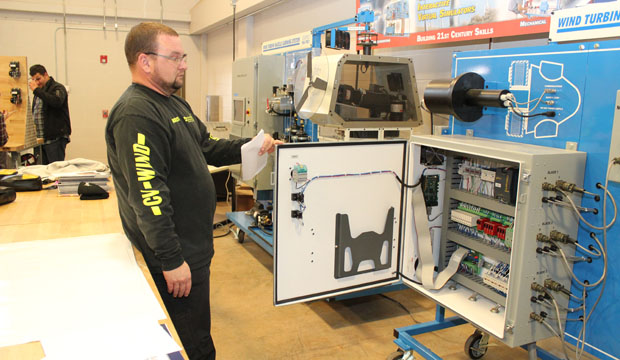 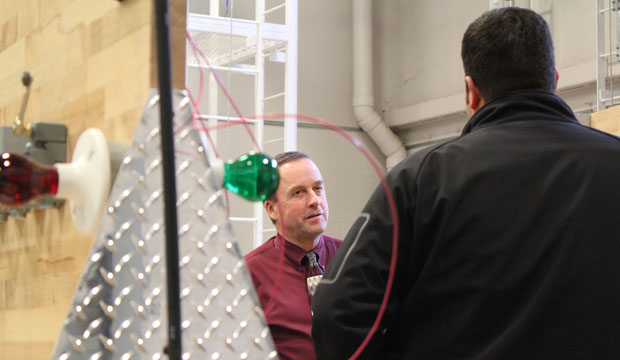 An instructor and student Oscar Briones in the wind technolgy classroom. 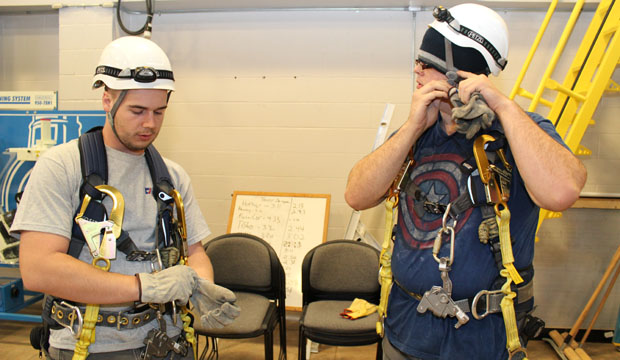 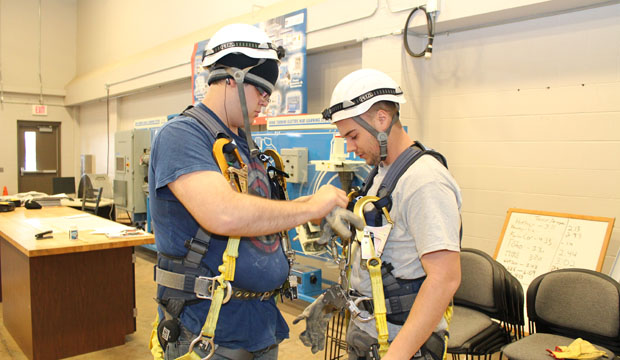 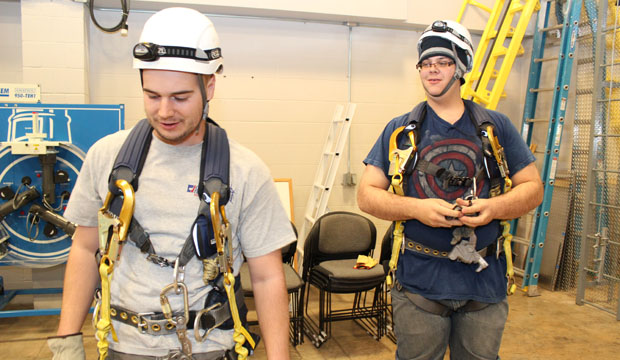 Bean and Bradshaw leave the classroom and head to the training tower. 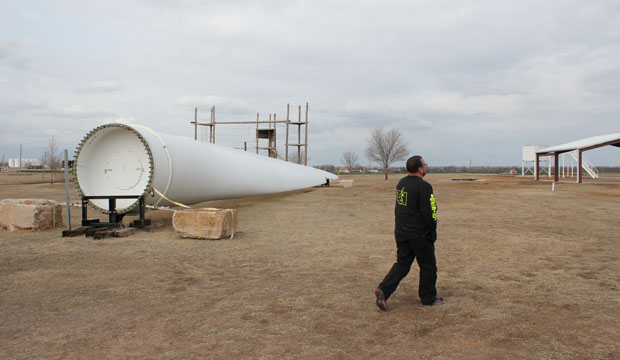 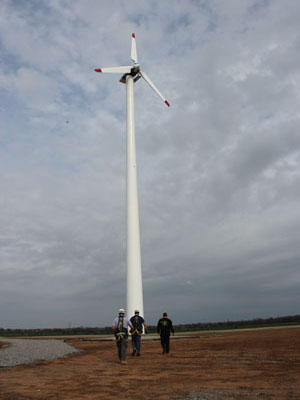 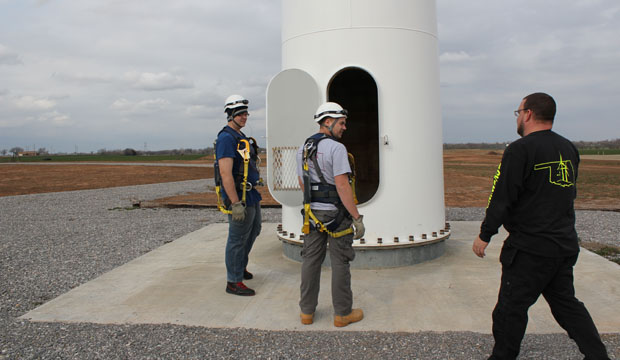 Instructor Tharp unlocks the access door and Bean and Bradshaw prepare for their climb. 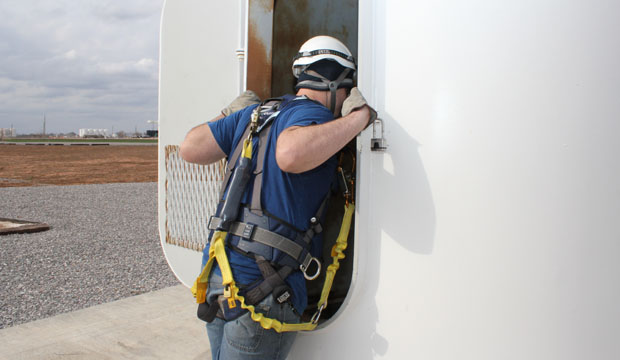 Bradshaw peers into the base of the training turbine tower. 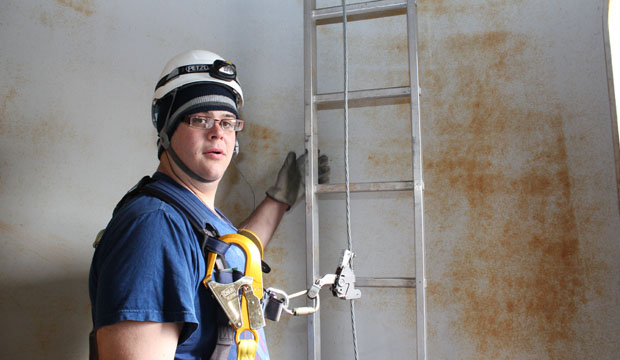 After fastening his harness to the safety cable, Bradsaw grabs the ladder and prepares for his climb. 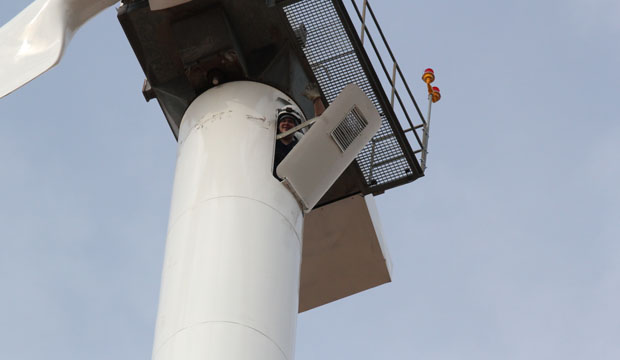 Bradshaw reaches the top and peeks out. 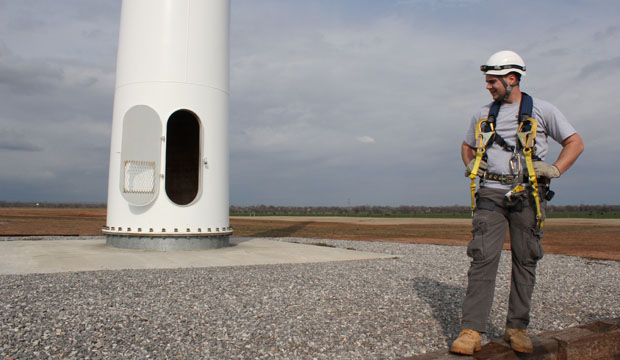 Bean relaxes after his climb. 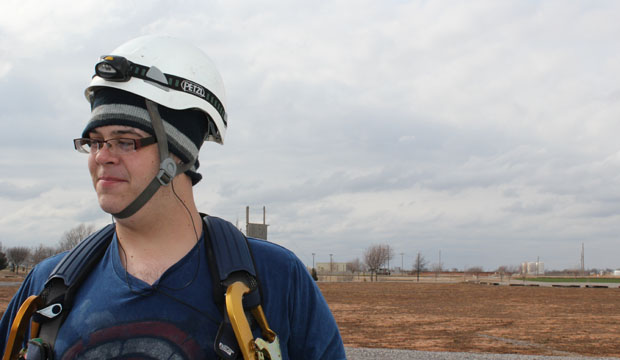 Bradshaw relaxes after his climb. 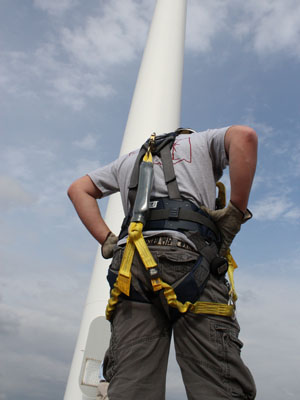 Bean is finished with his climb. 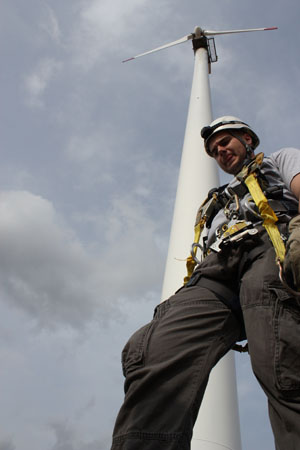 Bean gets ready to walk back to the classroom. 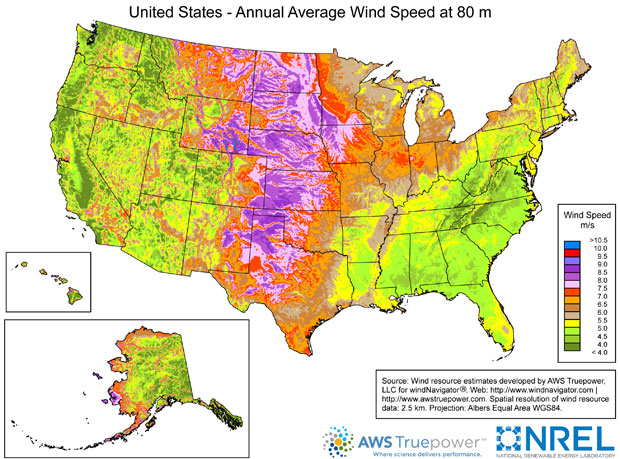