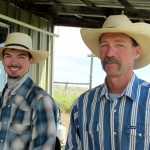 Justin and Chris Black, outside the rustic home that serves as Chris Black’s cow camp 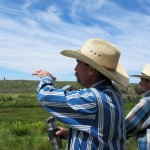 Black describes the lay of the land on his family’s ranch in the Owyhees. 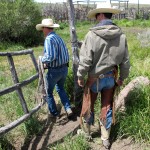 The Blacks walk through the corral gate on their way to catch and saddle their horses. 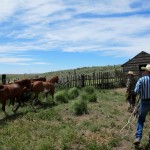 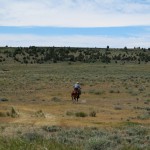 Chris Black rides toward a small group of cattle seven miles from his cow camp. 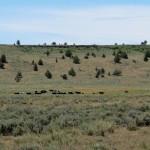 Slowly, Black moves the cattle toward a different grazing area. 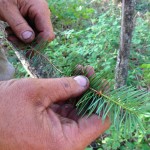 Mark Mahon explains how to tell the difference between a Douglas Fir and a Ponderosa Pine. 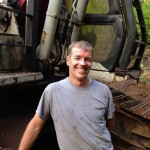 Mahon is a fourth generation logger. He hopes his own son, now in eighth grade, will follow him into the business. 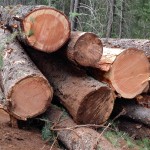 Freshly cut logs line a newly cut road on the private land Mahon’s company has been hired to manage and thin. 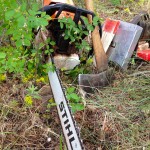 While modern logging relies on large and expensive machines, these remain the basic tools of a logger’s trade. 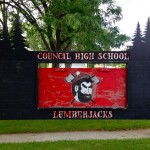 After the Council School District lost its shop program, locals donated time, goods and services to start it up again. 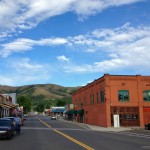 On a Friday evening, Council’s small downtown bustles, but its main street is marked by vacant shop windows.

In Idaho, the timber and ag industries are heavy hitters.  They play big roles in the state’s history and identity.  But the recession has dealt them different hands, dividing rural Idaho into winners and losers.  StateImpact Idaho takes a look at two industries, two counties, and two economic fates.

Rancher Chris Black and his son, Justin, manage a thousand head of cattle on 135,000 acres in the foothills of southwest Idaho’s Owyhee Mountains.  They spend most of their time miles apart – miles from anyone, in fact – working cattle.  But this day is a little different.  They’re walking to the corral not far from the small solar and propane-fueled house where Chris Black lives on and off from April through November.

“Are you going to catch a horse?” Chris Black asks his son.  “I’ll ride Happy,” he says.  They’re saddling up so they can move a group of cattle, grazing a few miles away.

Chris Black was up before daylight, and now the sun is blazing overhead.  Ranching is hard work and not for everyone.  He admits that.  But lately, business has been good.  “We’ve fared well in the last two to three years,” he says.  “We’ve fared quite well.”

Cattle prices are up.  That means he can breathe easy for now, and put money back into his operation.  “For instance, I bought a new tractor,” Black continues.  “My tractors were really old and in poor shape and – the older one was a ‘70s model.  And I traded it off for a brand new.”

Farming and ranching are known for their hard luck and slim profit margins, but for the last few years high commodity prices have buoyed the farm economy.  For the most part, the Idaho counties associated with agriculture have seen their unemployment rates remain low throughout the recession.  Take Owyhee County, where Chris Black’s family has ranched for generations.  Here, unemployment has seldom crept above six percent since the downturn began.

Four hours north, in Adams County, the story is different.  The appliance store in Council broadcasts a steady stream of old country hits onto the main street.  A 1960s Buck Owens classic  blares as trucks pass by.  But the town’s reality is less cheerful than its soundtrack.  In this county, unemployment has soared from pre-recession lows of three and four percent to more than 19 percent last fall.  That’s one reason I reached out to Mark Mahon, a fourth generation logger, born and raised in Council.

“So do you know what loggers call our work pick-ups?” Mahon asks, as we jump in his truck.

He drives out to a nearby logging site.  Owyhee County is known for its vast acres of grazing land, but here in Adams County, timber is the legacy industry.

Along with his parents and brother, Mahon runs a logging company with fourteen full-time employees.  They have one of the largest private payrolls in the area.  Still, this is an anxious moment for their business.  “Our company is stable,” Mahon says.  “We’ve got good equipment and good employees, and they’ve been with us a long time.  But I’m constantly stressed and worried about work.  Right now, we don’t have enough work to finish this logging season.”

It’s the end of a long day.  Mahon sits on the ground, surrounded by tall Douglas Fir and Ponderosa Pine.  The air is sharp with the smell of freshly cut timber.

Mahon’s company was hired to manage and thin this forest.  It’s a small job – 1,000 acres of private timber land – and it’s one of four contracts they have right now.  They need to line up more.  “The biggest concern I have is the men that work for us,” he explains.  “Am I going to be able to provide the jobs for them so that they can support their families?  And if I can’t provide for them, that’s almost like I’ve failed.”

Mahon says he’ll feel he’s failed not only those workers, but also his hometown.  In rural places like this, every job counts.

The meltdown in the housing market is the most immediate problem for loggers like Mahon.  Fewer homes being built means less demand for lumber.  But the housing downturn caps a long period of contraction for Idaho’s timber industry.  Jay O’Laughlin directs the policy analysis group at the University of Idaho’s College of Natural Resources.

“During the 1980s, the forest products industry in Idaho was twice as big as it is now,” he says.

It’s not easy to pinpoint the defining differences between agriculture and the timber industry that contribute to the differing economic fates of Idaho’s rural areas.  But O’Laughlin says land ownership is a big factor.  Idaho’s agricultural production happens mainly on private land.  The timber industry faces a separate set of circumstances.

“Seventy-five percent of the timber resources in the State of Idaho are on federal lands,” he explains.  “And that’s an entirely different situation than agriculture, with the one exception of grazing.”  And ranchers have so far not faced the same regulatory pressures as the timber industry.

O’Laughlin says national forests used to provide at least half of Idaho’s timber harvest.  Today, they provide less than 10 percent.  Underlying that shift is the decades-old push by conservation-minded groups to demand greater environmental analysis ahead of timber sales.  In short: the timber wars.

Mahon says this hard economic moment is spurring consolidation.  Loggers with better equipment and access to timber will pull through.  It’s similar to the process that’s ongoing in farming and ranching: fewer people work ever larger swaths of land.

Chris Black and Mark Mahon both want to be survivors.

“This is the ideal,” Black says.  He’s standing next to his horse, miles from cell phone service, or the nearest home.  “For me, anyway.  Is being out here and doing the things that I have grown up and love to do.”

Mark Mahon feels that same love of work, and tradition.  “Some of the greatest things about logging is every day you get a picnic lunch,” he says.  “You get a moonlit ride and a picnic lunch.  I wouldn’t trade that for anything.”

He wouldn’t trade it, and he hopes he never has to.

Credit where credit is due: this story was inspired by a blog post we read last month on Ridenbaugh Press/Northwest.